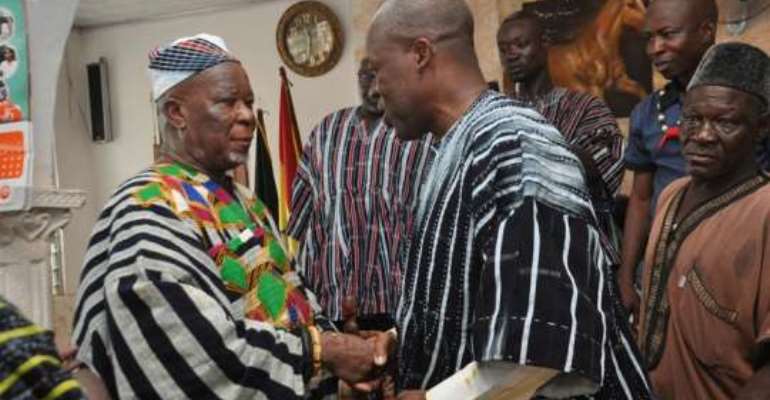 Buipe (N/R), Sept.8, GNA - The Buipewura, Abudulai Jinapor II, has called on politicians to conduct their campaign devoid of insult and rancour.

He said acrimonious campaigns are recipe for anarchy and thus charged them to bring their wayward supporters who go out to insult others to order.

The Buipewura made the call when Vice President Amissah-Arthur called him at his Palace at Buipe in the Central Gonja District of the Northern Region.

He commended the government for building the sheanut processing plant and cement factory in the area, which he said has provided employment for the youth.

Vice President Amissah-Arthur said he and his team had come to the palace to seek his blessings for the campaign.

He said President John Mahama is a visionary leader who has the development of the country at heart.

He said President Mahama combines hope and youthful energy as well as experience of office to lead Ghana to the future.

Vice President Kwesi Amissah-Arthur as part of his campaign tour of the Region made a whistle stop at Busunu to visit the graveside of the late Hajia Abiba Naba, the mother of President Mahama.

Muslim prayers were said by an Imam for the area for Hajia Naba.

Vice President Amissah-Arthur described her as a great and courageous woman who nurtured his son well.

He urged them to victory massively for President Mahama to be retained to continue with his developmental agenda.