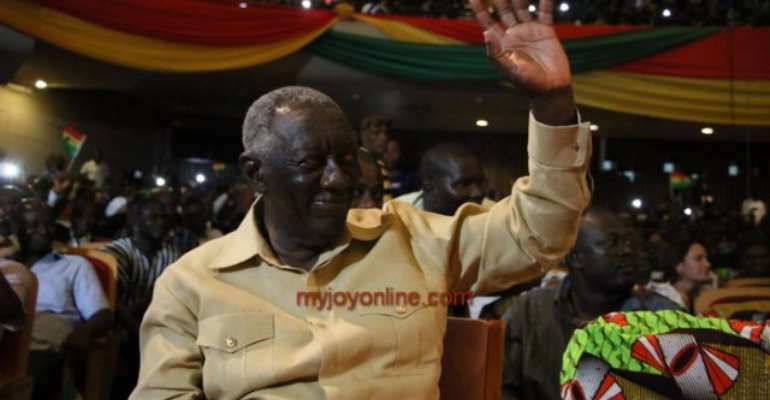 Speaking before a lecture by Vice Presidential Candidate, Dr. Mahamud Bawumia, he said: “Let me say a big thank you especially to the outstanding statesman whom I had the privilege to serve under both as Attorney General and as a Foreign Minister.”

He extolled the virtues of the ex-president for his commitment to Ghanaians welfare and good governance and went on thank him for turning up to chair the event.

Nana Addo said he is aware he would make some people uncomfortable with his statement but Kufour “has been the most outstanding President of the fourth republic" and there is "No doubt about it.”

The flagbearer was sure the lecture by his Vice Presidential candidate will go a long way for Ghanaians to hear the truth so they are well informed in choosing a leader for Ghana come the December elections.

Dr Bawumi's lecture is at the National Theatre is under the theme “The State of the Ghana Economy – A Foundation of Concrete or Straw.”

In a response to the frustration in a change of venue from the International Conference Centre which the party believes had some political connections, Nana Akufo-Addo remarked, “It appears that wherever Bawumia is going to speak; people will turn up whether at the National Theatre or Conference Centre.”

“It is important that at this very delicate juncture in Ghanaian history, that we should hear the truth so people can make informed decisions in December 2016. It’s clear to me and I hope it’s clear to people; that four more years of the Mahama government is going to lead to considerable damage to the prospect of the Ghanaian awakening," he said.

Nana Akufo-Addo believes that when Bawumia finishes with his lectures, the fact will become even clearer and therefore behooves those in the NPP committed to advancing and deepening Ghana’s democracy, to wake up to know that they carry a huge responsibility to persuade Ghanaians in all peace and serenity and in dignity to make a historic choice on the 7th of December.

He said the former deputy governor of the Bank of Ghana (BoG)’s was not going to engage in propaganda, but going to speak with facts backed by data.