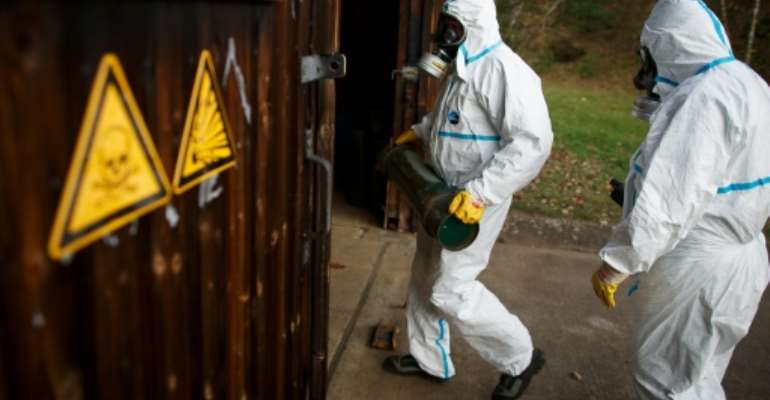 Employees in protective clothing carry a dummy grenade during a demonstration in a chemical weapons destruction facility at GEKA in Munster, northern Germany in 2013. By Philipp Gueland (AFP/File)

The Hague (AFP) - Libya's last chemical weapons stocks have arrived safely in Germany after being shipped out of the country, and will now be prepared for destruction, a global watchdog said Thursday.

"Another crucial step has been taken toward eliminating Libya's remaining chemical weapon precursors," Ahmet Uzumcu, head of the UN-backed Organisation for the Prohibition of Chemical Weapons (OPCW) said in a statement.

The stocks, including 23 tanks of chemicals, were shipped out on a Danish vessel on August 30 from the Libyan port of Misrata, under the supervision of the United Nations.

It was a multi-nation maritime operation led by Denmark, and Uzumcu said the remaining "chemicals arrived safely and securely at the specialised destruction facility in Munster".

The destruction of some 500 tonnes of toxic chemical products by GEKA, Germany's state-owned company for disposing of chemical weapons, will be the last phase of the operation to rid the unstable north African country of its stockpile.

The stocks had been stored in the central Jafa area, about 200 kilometres (125 miles) south of Sirte where Libyan pro-government forces are battling jihadists from the so-called Islamic State group.

The removal of the dangerous weapons precursors eases fears that extremists like IS could gain access to the weapons in Libya, which has been wracked by chaos since the 2011 overthrow of Moamer Kadhafi.

"These chemical weapon precursors have not been weaponised and now they never will be by anyone," the OPCW said in a statement Thursday.

The UN Security Council on July 22 endorsed the plans to remove Libya's remaining chemical weapons from the country.

Libya joined the UN convention banning chemical weapons in 2004 as part of Kadhafi's ultimately abortive efforts to shake off the country's pariah status and mend ties with the West.

At the time Libya joined the convention, it declared 24.7 tonnes of sulphur mustard, 1,390 tonnes of precursor chemicals and more than 3,500 aerial bombs containing chemical weapons.

It had eliminated all the aerial bombs, 51 percent of the sulphur mustard and 40 percent of the precursor chemicals by 2011, when operations to destroy the arsenal were interrupted by the uprising against Kadhafi, according to the OPCW.

Of three chemical weapons production facilities also declared in 2004, two were destroyed and one converted for civilian use, it said.

Radio Gold, XYZ, others yet to receive re-authorization lett...
47 minutes ago