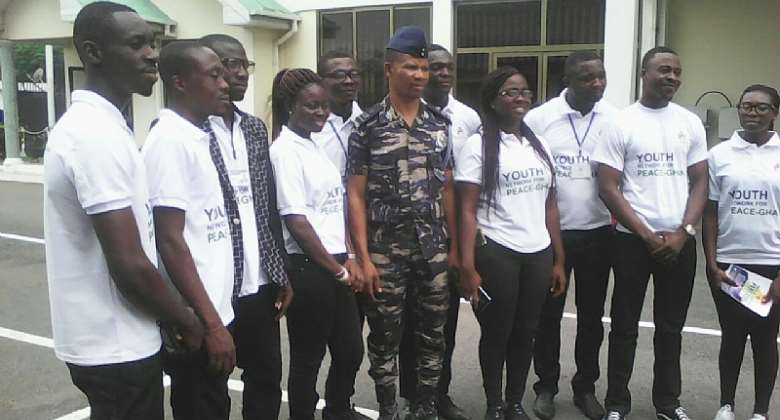 Youth Network for Peace-Ghana (YNP-GH), a non-governmental organisation aimed at raising awareness on the need for peace in the upcoming polls, has donated office equipment worth GH¢25,000 to the Ghana Police Service.

Presenting the items at the Police Headquarters, Mr. Michael Ofori Boateng, president of the group, said the move was to help resource the Joint Operations Centres of the police service to facilitate peace before, during and after the December elections.

The centres which have been activated at the National and Regional Headquarters of the Police Service, are manned by representatives of various security services to monitor and exchange information on how to maintain law and order in the country.

“The police is a major stakeholder in ensuring peace in this country as we approach the elections and that is why we want to support their work to allow peace prevail”, Mr. Boateng stated.

He urged the youth in the country to say no to violence and tribal politics and not allow themselves to be manipulated by politicians who are power drunk adding that, “young people are the future of Ghana and we must sustain the peace of this country and not plunge it into chaos”.

The Director General of Administration, Commissioner of Police (COP) Ransford Moses Ninson, who received the items on behalf of the service, expressed gratitude to the youth group for taking such an initiative.

The service, he said, had been challenged in resourcing the operations centre to attain world class standards and hoped that the donation would support the centre to achieve its mandate.

Mr. Ninson appealed to other NGOs and corporate institutions to assist the police service to effectively deliver its mandate saying, “if Ghana would be peaceful, we need more logistics, vehicles and other equipment to promote and sustain.

NPP flagbearer race: Alan Kyerematen is coming, I'm not an e...
39 minutes ago

Agenda 111 delayed because of location disputes, but I will ...
47 minutes ago