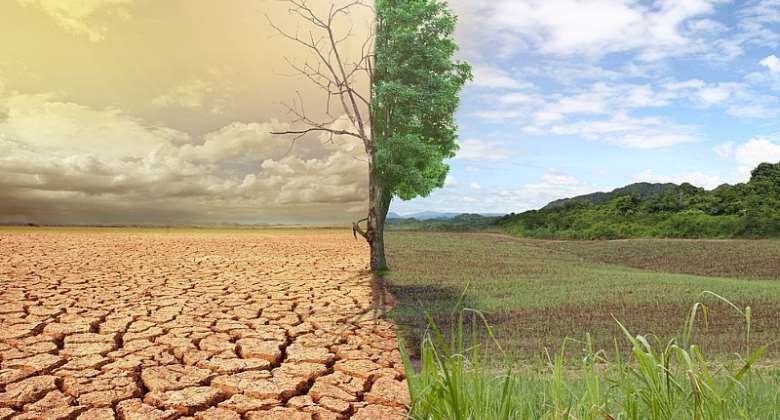 The climate of the earth has always been changing and no area on the planet has remained unaffected by climate change.

Climate change has affected all the economic sectors of Ghana and has hiked poverty, collapsed businesses and increased migration.

“The world’s poor, though least responsible for climate change, are the most vulnerable and already suffering its impacts,”- Pope Francis.

Ghana’s agriculture is rain-fed and the country is presently experiencing prolonged dry seasons and crop failures, causing frustrations and despair. Temperatures in all ecological zones of the country are rising, while rainfall has been reducing and becoming increasingly erratic.

The lack of rain has led to a catastrophic fall in the river levels decimating fish population and loss of pasture grazing land for livestock.

Climate Change has heightened food insecurity in the country. Not only has it reduced yield of crops but warmer temperatures had negative impact on food storage and increase food safety risks. Higher sea levels and changes to river and lake levels have impeded transportation of food to the market.

About 70% of the rural people are into agriculture but the scenario is quite different now because weather and climate anomalies had a strong impact on the agricultural sector and rural wage levels have been negatively affected. Women, children, the elderly and youths have laid down their tools to seek for better opportunities in cities and foreign countries.

Others have remained but changed their businesses to charcoal burning and this even changed the landscape of my country where agricultural land is being turned into barren areas.

Ghana’s electricity is highly dependent on hydropower generated from the Akosombo Dam. Power production accounts for the single largest share of all freshwater withdrawals in the country. As temperatures continue to rise, droughts and reduced water supplies has become the norm and have resulted in over four years energy crisis. This power crisis has stunted the countries development.

According to Institute of Statistical, Social and Economic Research (ISSER), Ghana is estimated to loss about $2.2 million daily and between $320 million and $924 million a year in terms of decline in productivity and economic growth due to the current energy crisis and these amounts to between 2% and 6% of GDP annually which does not include indirect cost.

Temperatures have warmed by 1­­­0C over the past 30 years. The excessive temperature has resulted in cerebro-spinal and pneumococcal meningitis that has claimed more than hundred lives nationwide could have some linkages to the effects of climate change on human health. This is because the meningitis is believed to occur from excessive heat.

Extreme high temperatures have also led to deaths from cardiovascular and respiratory diseases particularly among elderly people. Pollen and other aeroallergen levels became higher and triggered asthma cases in the country.

In 2007, 317,000 people were affected by floods in Northern Ghana, 1000km of roads were destroyed, 210 schools and 45 health facilities damaged and 630 drinking water facilities damaged. Similarly, the 2014 heavy rainfall on 6th March and June 3rd 2015 heavy downpour in the Greater Accra region that resulted in devastating repercussions on human life and properties is an evident of climate change in Ghana.

The aftermaths of the flood has resulted in contaminated fresh water supplies, heighten the risk of water borne diseases and created breeding grounds for mosquitoes.

World Health Organization(WHO) Situational Report on cholera Outbreak in Ghana indicates the country has recorded some 591 confirmed cholera cases with five deaths between January and May in 2015. In 2014, cholera outbreak has hit a record of 17000 cases with 150 deaths. Due to this, the Ministry of Health has always been issuing a cholera alert ahead of any flood in the country.

Climate change has increase the incidence of certain diseases such as malaria, bilharzia, and diarrhoea and other vector- water and borne disease.

To fight climate change needs the collective efforts of all and keeping the temperature to 1.5 degrees is the only way Ghana and other vulnerable countries can survive. Now is the time to implement solution!