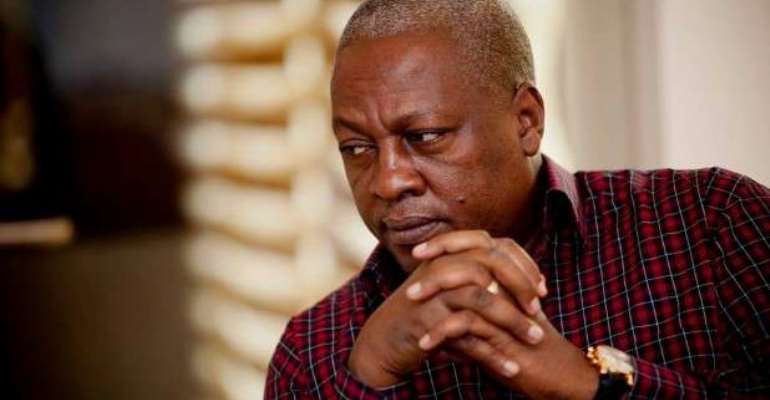 Eugene Arhin, Press Secretary to the Flagbearer of the opposition New Patriotic Party (NPP) Nana Addo Dankwa Akufo-Addo has stated categorically that members of the party will continue to call President John Dramani Mahama ‘incompetent’ and ‘visionless’ without mincing words.

According to him, it is not an insult to describe the President in that manner, saying they will only cease to call him that if he changes Ghana into paradise.

Mr. Arhin described the Mahama led administration as a failure which has subjected Ghanaians to unprecedented hardship.

Asked if Nana Addo believes the president is incompetent, he retorted ‘absolutely, we definitely don’t mince words about that based on your track record, he failed to deliver on his promises, we are going to continue to tell the people of Ghana exactly what his record has been which is a clear failure and he is even incompetent at what he told the people of Ghana, for the past years, it clearly shows that we have a president who is incompetent, we will not insult him’.

The president has received backlash for his recent insult on the Flagbearer of NPP, but he told Paul Adom Otchere on Good Evening Ghana that Nana Addo should accept criticisms.

Speaking on Ultimate Breakfast Show hosted by Lantam Papanko, Mr. Arhin said the president is a clear failure, saying until the latter solves pertaining issues bedeviling the nation, they will not stop calling him and his government ‘incompetent’.

In a sharp rebuttal to the president’s comments that Nana Addo is being primitive on his one-dam-one-village ideas, he wondered why the people the message was delivered to did not rubbish it.

He indicated that he is not surprised the president has joined the bandwagon, saying the latter is throwing dust in the eyes of the public.

The Press Secretary to Nana Addo advised the president to hold his horses, saying history has always proved NPP right.

‘If it was being done by the government am sure where Nana Addo mentioned this idea, the people would have told him these things are being done, the president’s own appointees have been laughing at Nana Addo so how can his appointees be singing a different hymn from the president, because at the end of the day they feed him information, we all heard about the free SHS policy Northern Development Authority, SADA, any idea Nana says, the NDC bastardizes and implements it.

‘The president is clearly doing politics, if you hear a policy that is resonating well with the people; certainly you do your best to distort it by throwing dust in the eyes of Ghanaians. This is a clear indication that this person has no vision,’ he asserted.