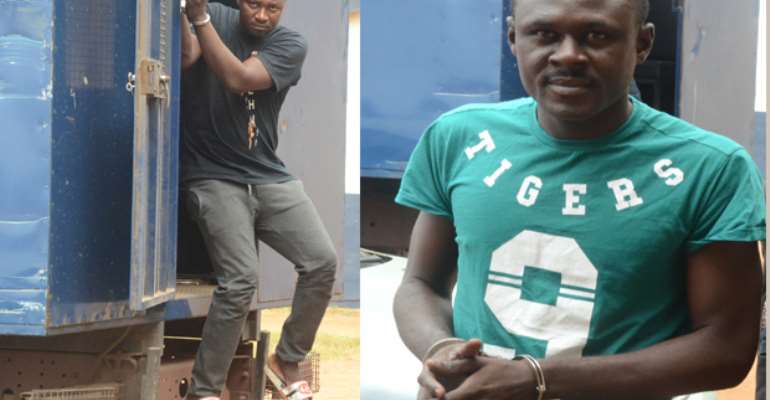 The autopsy report of Daniel K. Sarpong, 52, the driver of the Nkawkaw branch of GCB Bank bullion van who was murdered in the Donkorkrom police robbery operation, is ready.

Although DSP Abraham Annor, the prosecutor, did not drop any hints of the cause of death, he stated that investigation into the case was at an advanced stage.

He said the police would in two weeks' time forward a duplicate docket to Attorney General's (AG's) office for advice.

The two accused policemen – General Lance Corporals Solomon Elvis Mensah and Daniel Kissi Abrokwah – as well as their alleged civilian accomplice, Hafisu Mohammed aka Danjuma, a mechanic, are in court over the death of the driver of the vehicle, with registration number GN 1354-15.

According to the prosecution, the two cops had the intention to rob the vehicle which had always come to Donkorkrom in the Eastern Region to supply money to the bank.

“The two accused policemen who were on duty at the GN and GCB Banks respectively decided to exercise their plan of robbing the bullion van of any cash it was carrying,” the prosecution's charge sheet stated.

The three accused persons on August 16, this year at Mame Krobo near Tease in the Eastern Region, reportedly conspired and acted together with a common criminal objective to commit crime, to wit, murder.

The two policemen have been slapped with additional charges of attempted robbery and murder. Their pleas have not been taken.

The trial Magistrate, Stephen Owusu, has adjourned the case until September 20, 2016 after DSP Annor had told the court that Solomon was on admission at the hospital.

At the previous sitting, the judge had adjourned sitting until yesterday to offer the police ample time to conduct its intended further investigation into the incident.

DSP Annor said on the said day, the policemen discussed the plan to rob the van with Danjuma, who is their friend taxi driver.

He said the policemen waylaid the van at a spot between Tease and Mame Krobo each armed with an AK 47 assault rifle, at about 10:30 am, stressing that Danjuma drove his vehicle towards Ekye Amanfrom to monitor the arrival of the van.

The prosecutor said about 20 minutes later, Danjuma signaled the cops, who upon seeing the van, opened fire, killing Sarpong while another police guard on board the vehicle got injured but managed to return fire, compelling the accused policemen to flee into the bush.

They (policemen) called Danjuma who picked them in a bid to escape but the people mobilized men who managed to arrest the accused persons on board the taxi, according to the prosecutor.

Two AK 47 rifles, 23 rounds of ammunition, one cutlass and two metal bars were retrieved from the taxi.