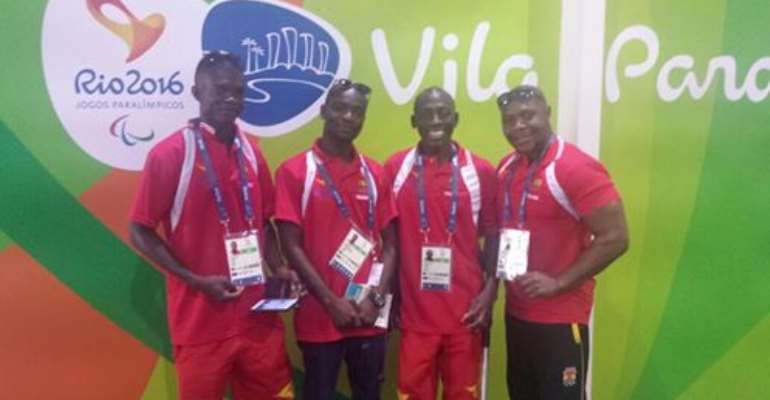 Latest reports from the camp of Ghana’s contingent at the Paralympic Games in Rio, indicate that all is not well with the three disabled athletes striving to lift the flag of Ghana high.

The contingent, made up of Alem Mumuni (Paracycling), Charles Narh Teye (Powerlifting) and Yusif Adamu (High Jump), is at the Game village without the Chef de Mission, Mr. Saka Acquaye. As a result of his absence as at press time, Peter Adjei, a Powerlifting Coach, is acting as Chef de Mission.

According to deep throat sources, the inability of the various state agencies to release monies early enough is putting the team’s preparations in disarray and is likely to affect their morale with just a day to the start of the games.

With the current situation, the team has no kits for the opening ceremony on Wednesday and their opening events.

When the athletes first arrived at the camp, they were refused entry due to the absence of the Chef de Mission, who was to formalize their stay. This led to the athletes having to negotiate with officials to get some of the things they should have been entitled to.

The arrival of Peter Adjei under the auspices of the National Sports Authority, saved the situation and eased their way to the Games village, awaiting the beginning of the competition.

Barring any last-minute intervention, the athletes would not have national attires for the opening ceremony on Wednesday and would have to depend on older kits for their competitions.

Keen followers of the Paralympic Games are hoping that things would normalize early enough to raise Ghana’s medal hopes.

The National Paralympic Committee (NPC) is reported to be working around the clock to salvage the situation as they liaise with National Sports Authority (NSA).

There are reports that the approved budget includes a refund of all the expenses the athletes made in qualifying for the Games as well as their training and preparation allowances.