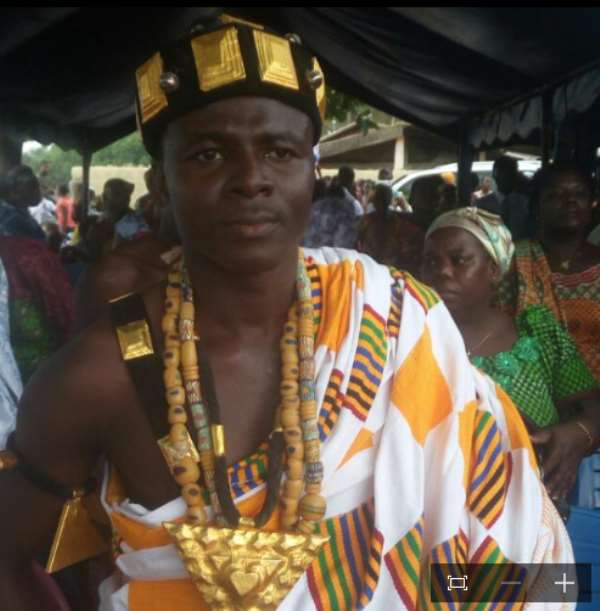 The Chiefs and people of Lower Axim Traditional Area in the Nzema East Municipality of the Western Region have officially coronated their newly installed Nkosuohene and three other Chiefs last Monday.

The ceremony was supervised by the Paramount Chief and Vice President of the National House of Chiefs Awulea Attibrukusu III last Monday where the Chiefs swore an oath to his office.

The ceremony which was well attended by all both from the Upper and Lower Axim witnessed a colourful event where the Nkosuohene Nana Nkwantabisa was carried in a palanquin and taken through the principal streets of Axim amidst musical displays.

The Omanhene Awulea Attibruku III, in his speech congratulated the newly coronated Chiefs and tasked them to remain focus in the dispensation of their duties.

He advised them to ensure that their modus operandi reflects the desires of the people as well as consult the appropriate quarters for counsel on decisions that involves the people of Axim.

On his part, Nana Osei Owusu Banahene, the Asanteman Nkosuohene who graced the occasion and doubles as the father of Nana Osei Nkwantabisa advised the newly coronated Chiefs to be diligent in their respective duties and always heed to the advice of their overlords.

He tasked them to ensure that their loyalty is always directed to their overlord and the people that they are serving.

Nana Nkwantabisa, in his remarks expressed gratitude to the Chiefs and People of Axim for the confidence and honour they had in him.

He also called on all to support him achieve his good plans which he seeks to bring to bear, these he mentioned as the health, education, youth empowerment etc.

Nana Nkwantabisa urged all to rally behind him in other to dispense his duties successfully by offering constructive criticisms that would culminate into the needed development.

He assured the people of his continuous commitment to bring more developmental projects to help improve Axim and its environs.

The occasion was used to launched an appeal for support towards the construction of a fencing wall for the Axim Government Hospital by the Nkosuohene.

Nana Nkwantabisa is the grandson of late Mr Emmanuel K. Osei, also known as Nana Osei Nkwantabisa, the Asanteman Nkosuohene of Sepe Timpomu of Kumasi, in the Ashanti Region.