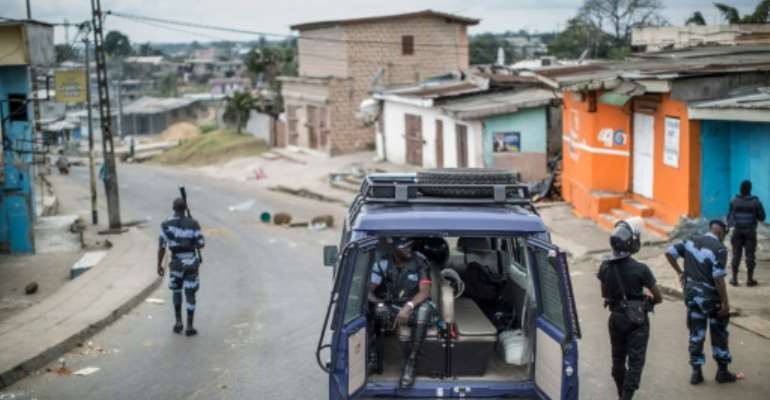 Gabonese police officers patrol near a barricade in the streets of Libreville on September 2, 2016. By Marco Longari (AFP/File)

Libreville (AFP) - Gabon's justice minister resigned on Monday, in the first high-level defection after days of violence following incumbent Ali Bongo's disputed re-election, as the opposition leader called for a general strike to "topple the tyrant".

Despite Jean Ping's appeal for an economic blockage, the centre of the capital Libreville was its usual bustling self on Monday as France said several of its dual citizens were "unaccounted for" following clashes and mass arrests.

After being shuttered for days over the post-election violence, banks and shops were re-opened in the seaside city and taxis were returning to the streets.

According to an AFP count, post-election chaos has claimed at least seven lives in the oil-rich central African nation, ruled by the Bongo family since 1967.

Gabonese authorities, however, said Monday the toll was three killed and 105 wounded, with the government saying some deaths had previously been incorrectly attributed to the clashes.

Bongo's rival Ping, a veteran diplomat who has held a top African Union job and served as foreign minister, has vowed to challenge the election results.

"We cannot accept that our people will be killed like animals without reacting," Ping said on Facebook.

"I propose to cease all activity and begin a general strike," he wrote.

"We must use all means of resistance to topple this tyrant and believe me, he is on the verge of falling."

Bongo was declared victorious by a razor-thin margin of just under 6,000 votes, but Ping has insisted the vote was rigged and on Friday claimed victory for himself.

Gabonese opposition leader Jean Ping gives a press conference at his residence in Libreville on September 2, 2016

In the first high-level defection since the vote, Justice Minister and second deputy prime minister Seraphin Moundounga on Monday announced his resignation and demanded "a recount of the votes, polling station by polling station, and registry by registry".

Ping too is calling for a recount -- something the Gabonese authorities have so far refused to do. Speculation has mounted that he could launch an appeal for a recount at the Constitutional Court.

Ping's supporters say fraud was rampant, notably in the Bongo fiefdom of Haut-Ogooue in the east.

It is one of the country's nine provinces and turnout there, according to official figures, crossed 99 percent with 95 percent voting for the president.

Meanwhile, a high-level African Union delegation including "African heads of state" is ready to be dispatched to Libreville to help calm the situation, AU chairman and Chad President Idriss Deby said.

Post-election unrest has claimed at least seven lives in oil-rich Gabon, ruled by the Bongo family since 1967

The violence after the announcement of the results on Wednesday has sparked international concern with top diplomats calling for restraint as rights groups raised alarm over the use of excessive force.

Some 800 people have been arrested in recent days in the capital, with the authorities accusing them of looting, while lawyers say they are being held in "deplorable" conditions.

"Arrests have been carried out in recent days. Several French compatriots are unaccounted for," according to a statement from French Foreign Affairs Minister Jean-Marc Ayrault.

They are believed to be roughly 10 dual French-Gabonese nationals who cannot be located, according to a diplomatic source.

Anxious family members crowded before the court house in Libreville, hoping to catch a glimpse of loved ones missing since the rioting.

'Lull before the storm'

Several prisoners on Monday told AFP they had been beaten, denied food and water or questioned harshly by authorities.

"There were no toilets. We slept in our pee," said a man who asked that his name be given as Matthieu to protect his identity.

"I asked for water. A guard put some water in a lid and told me 'Three lids, no more,'" he said.

A man holds a placard reading, "Bongo get out!" during a demonstration in support of the Gabonese people, at the Esplanade du Trocadero in Paris, on September 3, 2016

UN chief Ban Ki-moon spoke to both Bongo and Ping on Sunday and "deplored the loss of life", a UN statement said, adding that he "called for an immediate end to all acts of violence."

Tensions remained high in the economic capital Port-Gentil and Total workers turned up for the first since Tuesday, a management source in the French oil giant told AFP.

A Total worker said there had been gunshots heard in the city overnight. Gabon's sole refinery remains closed.

The troubles have also caused prices to rocket.

"This is the lull before the storm," said a fruit and vegetable wholesaler, speaking from the central town of Lambarene.

The internet was shutdown again Monday following a brief resumption after being cut off since Wednesday.

After he died in June 2009, his son Ali won an election but opposition media claimed he had essentially been installed by France.