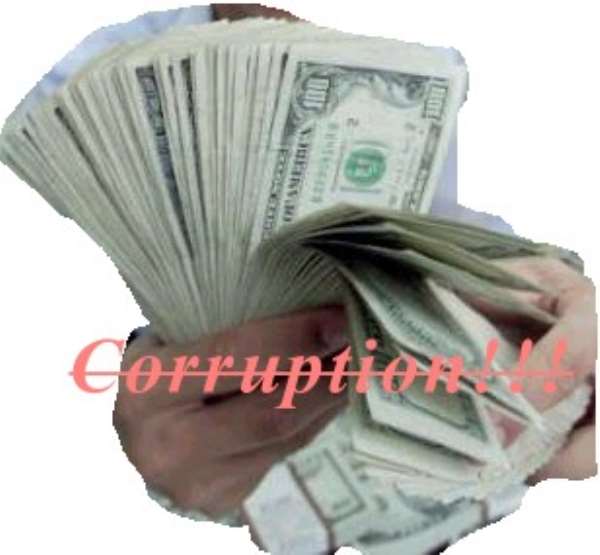 The District Co-coordinating Director (DCD), Mr. Samuel B. Kyei and the Finance Officer (DFO), Mr. Adakwa Nketiah of the Asutifi District Assembly have teamed up and looted the assembly's fund amounting to several millions of cedis. Following this bizarre act, the two top officials have been asked to proceed on leave, but earlier before the decision, the District Finance Officer (DFO), Mr. Nketiah, who is a staff of the Controller and Accountant General's Department (A-G) attached to the assembly had been transferred to the Brong Ahafo Regional office of the A-G in Sunyani.

In an investigation conducted by The Chronicle, the DFO and his crony, the DCD, Mr. Kyei, had conceded that there was embezzlement at the assembly.

Whilst Mr. Nketiah agreed that he and Mr. Kyei collaborated to steal the monies, Mr. Kyei on the other hand, denied being part of the deal.

The DFO told The Chronicle that he and the DCD had stolen the money, but the DCD was not happy when the amount valued at ¢40 million was shared equally and this has brought an enmity between the two top officials.

Mr. Nketiah disclosed to The Chronicle that he was making efforts to pay back the money, and as at the time of the paper's investigation, he had paid ¢30 million to the coffers of the assembly.

He told The Chronicle that his sister in America had sent him ¢ 30 million and very soon, she would send the remaining ¢10 million.

According to him, he was trying to replace the stolen money, because he did not want any trouble and therefore pleaded with this reporter not to publish it, “else I would die, because I am sick of blood pressure.”

He further disclosed that the assembly was divided over the issue, as some of the members wanted him to be handed over to the police, but others pleaded for him. When the District Chief Executive (DCE), Mr. Michael Nsiah Agyarpong was contacted, he confirmed that Mr. Nketiah had since paid ¢30 million.

The DFO told The Chronicle that the DCD had failed to admit that he was part of the fraud deal, because he claimed there was no document that indicated that he, the DCD, had been involved in the embezzlement.

He said, “Mr. Chronicle, I altered the figures on the cheques with his (DCD) knowledge before we signed them and so I don't know why he is saying he is not part of the deal.”

The DCD, when contacted, said he could neither deny nor confirm the allegations. He told this paper that as a civil servant, he had to seek permission from his bosses before he could speak to the press.

He however disclosed that he had authorized his wife in Kumasi to take action if detractors insisted on going to the media.

The DCD hinted that he had asked the police for protection before he could come out with the truth, because the integrity of some top officers of the assembly was at stake.

In the presence of this reporter, Mr. Kyei telephoned the Brong Ahafo Regional Coordinating Director, Mr. F.O. Boateng, that he was seeking clearance before he could speak to our reporter.

After their discussion, the DCD invited two National Service Personnel who were tasked to work on the minutes of the assembly's last meeting to bring the minutes to him, so that he could provide this paper with copies.

But, when the service personnel came, Mr. Kyei had a sudden change of mind and said, “ I have to see the Presiding Member of the assembly before I can give them to you.”

Mr. Kyei accused one Yaw Kyere of being behind the allegations, saying he had told the whole assembly that the financial misappropriations would not end at the assembly meetings.

In a related development, The Chronicle's investigations revealed that the DCD had misappropriated funds of the assembly meant for the Asutifi District Election Task Force (ADETF), formed to monitor the just ended general elections.

Members of the Asutifi District Assembly agreed that ¢30 million be withdrawn as the expenditure of the task force, but when the cheque was issued, ¢80 million was written on the face of it and subsequently withdrawn.

When information reached the members, some of them protested against the withdrawal of the additional ¢50 million and it was ordered that the money be returned to the Bank.

It was disclosed that the DCD, whenever items were to be bought, inflated the figures. For instance, the paper was told, he bought a secondhand airconditioner at ¢7 million, but inflated it to ¢13 million.

It was alleged also that the when fuel was to be purchased, DCD normally bought 10 gallons but would declare 28 gallons to the task force.