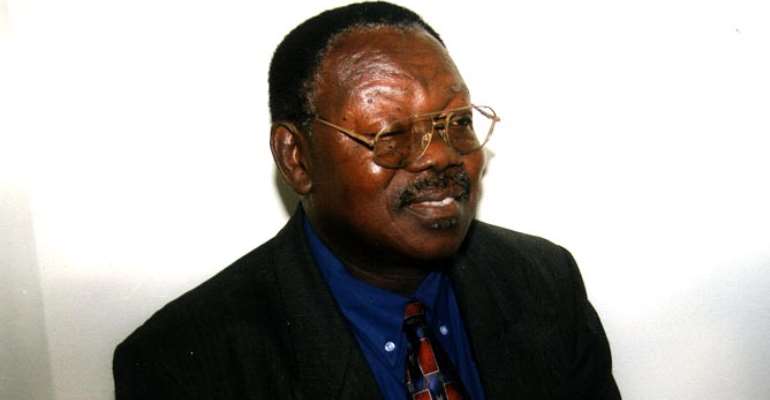 ... After the hair-splitting at the vetting... .. Certificates Can get lost Vetting is a very frightening word in Ghana. CVC, the dreaded acronym for Citizens Vetting Committee terrorised Ghanaians in the early eighties. Now in another form, the word has come to haunt political office seekers who have to get the nod of parliament.

Three ministers-designate are currently in limbo because they have been snared by the vetting net of parliament. However snippets reaching the ADM indicate that the Sub-Committee of the Appointments Committee of Parliament investigating aspects of the Greater Accra Regional Minister-designate Sheikh I.C Quaye's testimony has almost concluded - in the Sheikh's favour.

The main bone of contention was whether Sheikh Quaye really obtained a certificate from Cambridge University or not and whether he has a Diploma in Journalism.

However, the ADM is reliably informed that members of the Committee have resolved that during the 1950s, such certificates were obtained externally by secondary schools through British institutions especially Cambridge University.

Information available to the ADM indicates that the Committee has planned to visit Odogonor Secondary School, where the Sheikh attended school to crosscheck the facts.

It would be recalled that during the vetting of ministers two weeks ago the names of three ministers-designate, Sheikh I.C Quaye, Dr. Richard Anane and Mr. Isaac Edumadze made the headlines over some aspects of their testimonies to the committee. The Appointments Committee in their report to Parliament deferred their decisions on them and referred it to a Sub-Committee to investigate.

The ADM checks at the Ghana Education Service (GES) indicate that the Cambridge certificate system in those days was later transformed to the GCE O' and A' levels later administered by the West Africa Examinations Council.

This was changed in the 1990s to the current Senior Secondary School Certificate Examination.

ADM's efforts to reach Sheikh I.C Quaye for his comment were not successful. However, an insider from his camp told the ADM that notwithstanding the current brouhaha over his certificates he has performed above reproach as an MP and Regional Minister. In truth, he is one of the most senior MPs in Ghana's current parliament.

"During his tenure he was able to bring peace to bear on traditional, Christian and Moslem leaders especially during the ban on drumming," the insider said.

On the issue of the certificate in Journalism, the insider said Sheikh I.C Quaye has 15 years of editing experience with a religious paper called "Al Risala" in the English language. "He ceased being the editor of that paper when he was appointed a Minister of State and the facts are there for them to check," it said.

Credible information has revealed that Shiekh I.C Quaye has shown copies of the paper to the Committee to buttress his claim. "Everyone knows that their house was demolished in 1963 and I do not understand why people are talking as if the Sheikh lied. It is true and it was only the cloth he was wearing that day that was left and he was whisked to the prison."

The issue of how long certificates, diplomas and other documents remain with their owners has become a public issue as a result. ADM Editor, Alhaji Harruna Attah says he does not know where his university degree and secondary school certificates are. He lost them years ago.

Others like the editor of the Independent, Mr. Egbert Faibille Jnr. say they can recall even their Common Entrance Index Numbers. But whether such minutiae can be the basis for judging people for public service would once more be tested anytime from this week when the president presents his list of deputy ministerial appointees.