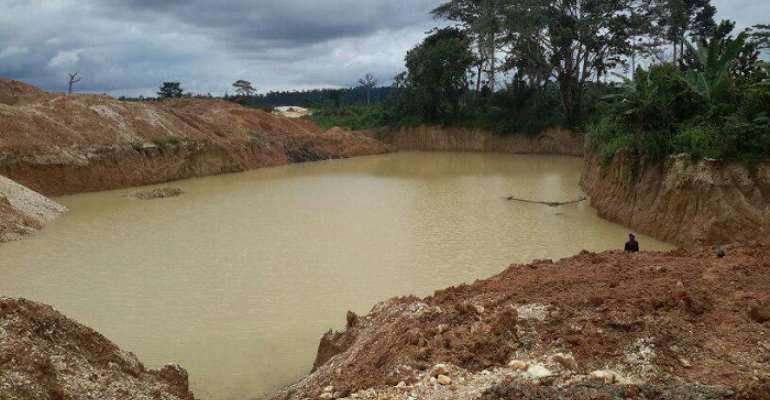 Illegal miners have destroyed large swathes of cocoa farms in Bepotenten and Gyamang, two farming communities in the Amansie Central District in the Ashanti Region. The level of devastation has resulted in some residents abandoning their farming activities and relocating their families to other communities to prevent them from falling into the open gullies dug by the illegal miners.

A Chinese woman, identified as Madam Asia Huang, is said to be the lead operator, working with some Ghanaian collaborators.Opinion leaders in the two communities claimed that Madam Huang often encroached on their lands with the alleged backing of some armed police and military personnel.ClaimsSome residents alleged that the  Regional Security Council (REGSEC) ordered the release of some excavators and a Toyota pickup confiscated by people of the communities and the regional security liaison officer.A copy of the letter directing the release of the excavators, which was seen by the Daily Graphic, was dated August 16, 2016.

The letter, which was signed by the Regional Co-ordinating Director, Mr Kofi Dwumor-Asubonteng, stated that “I have instructions from the Ashanti REGSEC to order the release of four excavators and one Toyota pickup seized and being kept at Finaso barrier in the Obuasi Municipality to the owner, Madam Asia Huang.”

The equipment of the Chinese were seized while the miners were illegally mining close to River Offin, near Manso Tanokrom.

Release
Explaining why the tractors were released to the woman, the Deputy Ashanti Regional Minister, Mr Andy Osei Okrah, said although the regional security liaison officer undertook the operations in collaboration with a police team, it was without the knowledge of the REGSEG and so it was illegal.

He explained that the REGSEC knew nothing about the activities of Madam Huang and indicated that the authorities were now investigating her activities.

Situation
The situation has led to fear and tension among the farmers.

During a visit to the two communities by this reporter, it was observed that many acres of farmland, especially cocoa farms, had been destroyed through illegal mining activities.

Large dugouts have also been abandoned and streams that served as sources of water for the people have been blocked.

Some armed military personnel were also seen providing protection for mining businesses, which according to the local people, belongs to “the powerful Chinese woman.”

Concerns
According to the Odikro of Bepotenten, Opanin George Anane, the community had been overwhelmed by illegal mining operations, a situation which had forced them to walk long distances  to get potable water.

Opanin  Anane added that roads they had constructed through communal labour had also been destroyed by the heavy earth-moving equipment of the illegal miners.

He said appeals to the district and regional administrations to save the situation from further deterioration had yielded no results until recently when some security agencies went in to seize the huge excavators.

The chief said it was after that action that Madam Huang sent some people to inform the affected farmers that she would like to dialogue with the community.

Casualties
For her part, a former Assembly Member for Bepotenten, Madam Janet Addei-Gyimah, said within the last three years, six children had died as a result of falling into the abandoned pits created by the miners.