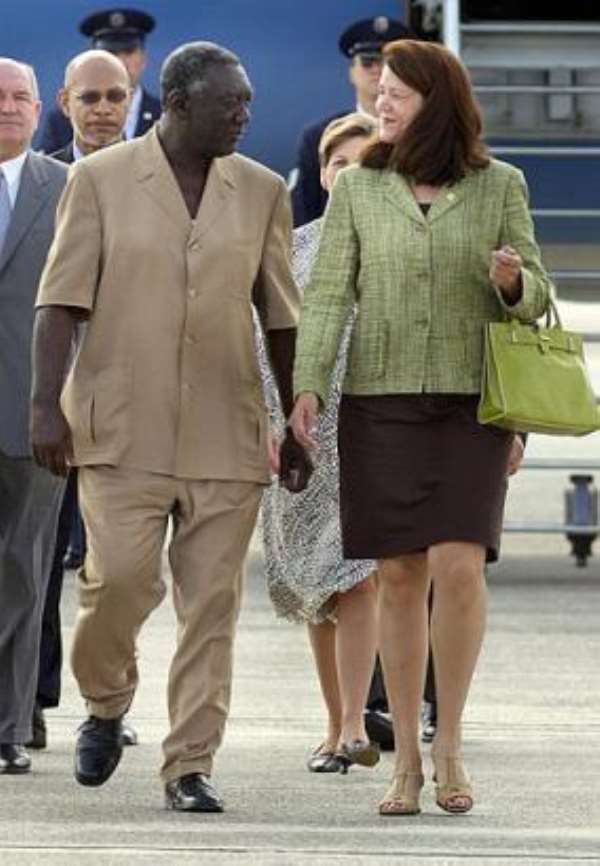 Accra, Feb 2 (Lens) -- Dr. Richard Anane is the laughing stock of very powerful and knowledgeable persons in the NPP for not seeing the clever trap that Mr. Kufuor set for him, which was neatly sprung on him by Hon. Freddie Blay, a strong Kufuor ally.

NPP insiders say Mr. Kufuor was not unaware of the negative stories about Dr. Anane in some of the newspapers about his dalliances with an American lady that resulted in the birth of handsome Nicholas (Nicky) Anane, as well as allegations that he had transferred monies totalling, if not in excess of, ninety thousand dollars ($90,000.00) to his "Adam's Apple" in the US.

According to NPP insiders, the President had used the National Security apparatus to verify some of the reports in the media but decided not to dismiss him, not only because Dr. Anane is a long time friend, but more importantly because Dr. Anane was, and still is, the MP for one of the influential constituencies in the Ashanti Region. Dismissing him outright would have affected his image in the constituency and possibly exert a negative effect on Mr. Kufuor's own votes in the elections.

Rather than dismiss Anane and endanger his seat as well as votes of his constituents, Mr. Kufuor chose to leave the "dismissal" to be done by the Appointment Committee of Parliament. Thus creating the impression of Mr. Kufuor as someone who believed in Dr. Anane and stood by him by re-nominating him. A clever move, since by the time Anane got to face the Appointment Committee, the 2004 elections would have been long over and he had already delivered both the seat and the haul of votes for the votes to shore up his boss' re-election bid.

"Poor Dr. Anane, he should have known that his re-nomination was intended to throw him to the wolves and if the wolves devour him Mr. Kufuor could not be blamed for not appointing him," said one insider.

NPP insiders insist that it was not for nothing that the Chairman of the Appointment Committee, Hon. Freddie Blay, himself being dogged by insistent whispers that he has recently fathered a child out of wed-lock, was the one that opened Dr. Anane's chamber of secrets with a direct question about his relationship with the American woman called Alexandria, said to be affectionately called by Dr. Anane as Alexei.

"When word got to the oldman that the Minority had intimated that they were only going to enter into the matter of funding without going into the gory details of Dr. Anane's dalliances with the American lady because it would have embarrassed Dr. Anane, Freddie Blay was quietly instructed to ensure that the matter came up no matter what happened. That accounts for why, Freddy Blay introduced the subject by getting Dr. Anane to confirm that he has had an extra-marital affair and eliciting the names of the woman and the child from Dr. Anane," one insider revealed.

"You might have noticed that the most embarrassing personal questions were asked by leading members of the Majority, while the Minority concentrated on finding out about the monies that he was alleged to have transferred to the woman, indeed I recall Dr. Kumbour, a leading member of the Minority, saying categorically that "my interest is in the allegations about the money." I am telling you the Majority were under instructions to make sure that he does not pass," our source insisted.

Meanwhile as at the time of going to press yesterday the Appointment Committee has released the names of nominees that the Committee has cleared for appointment to various Ministerial positions. Dr. Richard Anane was not one of them, thus appearing to confirm that he may well be on his way out.

The Appointment Committee has explained that they have taken the decision to defer submitting a report on Dr. Richard Anane and two others, namely, I. C. Quaye, the self proclaimed Shiekh, and certificateless Jake Obetsebi Lamptey. The three have been put in the cooler awaiting some further investigations. From all intents and purposes, the Presidential Coup de grace has been delivered and the “Bad Boy” has been knocked out.

But is that the end of the matter? If one son out of wedlock can cost him so much, what could the political cost of twins born out of wedlock? The answer will soon be revealed. Stay tuned.