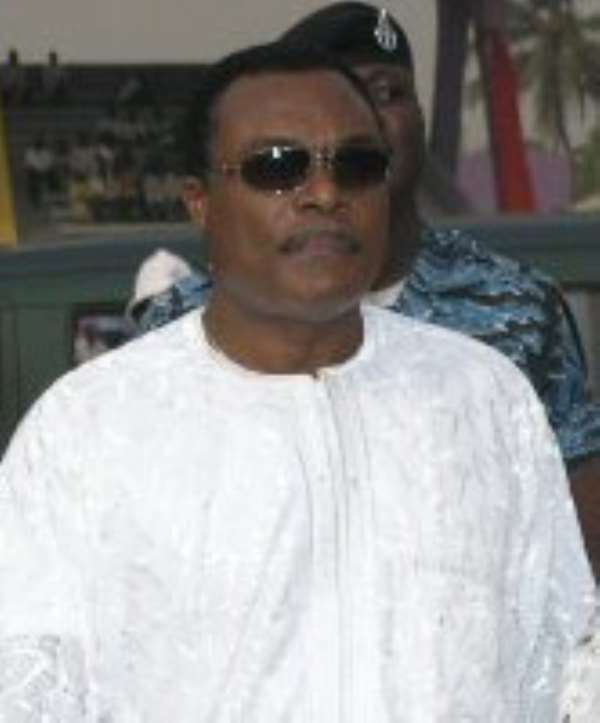 Expert reports available to the Network Herald suggest that aside multi-pliers, heavy duty Alligator pumps and Caterpillar excavators and combined harvesters, over 50 water-pumping machines that are supposed to pump water onto the Aveyime rice fields have been left to rot at the factory's warehouse.

A huge quantity of bags of fertilizer and drums of weed killers that were acquired for the plantation found unattended had apparently been left to expire.

The workers of the Quality Grain Aveyime Rice Project in the Volta Region have therefore described as unfortunate, statements made to the Appointments Committee by the Minister-designate for Health, Major (Rtd) Courage Quashigah, that the equipment at the site are in good shape.

To the best of their knowledge the equipment have not been maintained since the last harvest in 2001.

Major Quashigah had intimated last Monday that everything but an aircraft at the project site was in good shape because the Engineering Service Unit of the Ministry had been carrying out routine servicing on the equipment.

But the workers were also ready to forgive the Minister because “since his appointment he's visited the facility once.”

The workers were amazed that the equipment including the Ayers aircraft had been left to rot at the site and that several attempts to solicit funds for fuel and other logistics to activate the engines to ensure that they are in good shape have yielded no response from the authorities.

They accused government and the chiefs of Aveyime of not showing any commitment to the operations of the factory, which they were sure would create enough jobs to put food on the table of the town's folk.

According to them, as allodia owners of the land, the chiefs should have shown enough interest in the project by stepping into the litigation over the 3200-acre because of the nonpayment of compensation.

"They should have intervened by now to take custody of the land and team up with any potential investor and government to assure him or her government that the land is safe for investment".

To them, the "state of the art facility" was being terribly under utilized because it only operates on the availability of Paddy rice from Afife and Asutsari rice farms once in a year instead of the 3200-acre irrigated farm acquired by Quality Grain which fed the Mill throughout the year.

Currently, only three companies: Messrs Kwesi Opoku, Frederick Kyei Enterprise and Remma currently procure paddy rice from the farms and brings it there for milling. They package the Mr. O and Afife Special Rice among others.

The workers who were full of hope that the authorities will do the necessary things for the company to start operation again in the shortest possible time were not amused of the less than 250 thousand cedis they make monthly. Even that they said was occasioned by the number of times that the three private companies mill their Paddy rice at the facility.

In a related development, certain legal practitioners have expressed concern about the increasing instances of probable perjury on the part of officials who on oath, appeared not to be presenting facts to the committee.

The committee has also put in place a three-man committee to “clarify” certain grey areas of presentations made by Minister designates at the on-going vetting by parliament.