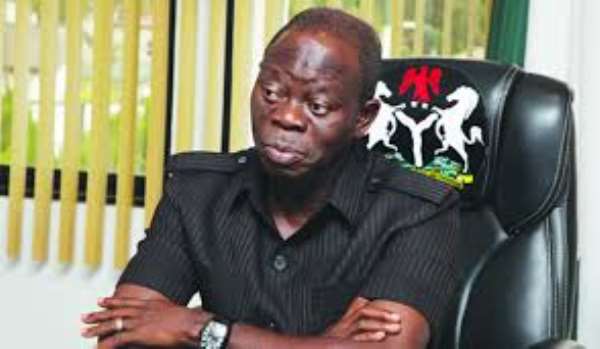 Dante Alighieri, a poets and a great philosopher once said that “the hottest places in hell are reserved for those who, in times of great moral crisis, maintained their neutrality.” Our own very distinguished Nobel Laureate, Professor Wole Soyinka also said, “the man died in him who remained silent in the face of tyranny.” I am absolutely convinced this is the appropriate time to speak out so as not to partake in the aforementioned retribution. We are indeed in a time of great moral crisis in our great country Nigeria no doubt, as infraction with impunity is being perpetuated against the Constitution. Specifically, President Muhammadu Buhari’s parochial appointments violated chapter 14 Sub-section 3 of the 1999 Constitution as amended with nepotism and sectionalism. The systematic Islamization of secular Nigeria; the State of the economic in recession, and more worrisome, is the plight of Pensioners and Local council workers, who are facing injustice and widespread tyranny in Edo State, attest to this fact.

The predicament of the unpaid Local Government Council workers and Pensioners in Edo State, whom are in Service and those whom have served the State meritoriously in their distinguished carriers without blemish deserves the urgent attention of the Edo State Governor, Comrade Adams Aliu Oshiomhole. For the Holy Scriptures says in 1Timothy 5:18 “the worker is worthy of his wages” form the basis of my comments.

In 2007 when Comrade Adams Aliu Oshiomhole was elected as governor of Edo State, the Edo people shouted Uhuru; with jubilation for the dawn of a new political vista, freedom and political Eldorado, given his perceived advocacy for the downtrodden as a foremost labour leader. True to his electioneering promises, Oshiomhole transformed Edo State to the best available resource through his Urban Renewal & Infrastructural Development Projects, where new roads were constructed and existing ones expanded. The Prompt payment of State workers’ salaries was not left despite dwindling Federal allocation, where other States have requested and received financial bailouts. He invoked and implemented relevant tax laws leading to the Increment in the State Internally Generated Revenue (IGR). Massive Investment in Educational sector (‘Red Roof Revolution’) was not left out. The Health sector also received a boost. The auspicious investors’ friendly environment in the State has attracted huge investment.

However, in Edo State, the infraction on the constitution and the autonomy of Local Government Administration is abuse in progress. Wherein the third tier of Government has been relegated to an appendage of the State Government through unnecessary interferences.

The recent protest embarked upon by Pensioners and Local Government workers Edo State, under the aegis of Nigerian Union of Pension (NUP) and Nigerian Union of Local Government Employees (NULGE) respectively, is a reference point. The protesters are protesting the non-payment of their salaries arrears, gratuities and pension accordingly. According to them, no Edo Local Government worker has been paid in 2016, with the worst hit being Egor LGA workers who are being owed 18-months salaries. Also, Retired Civil Servants, under the Nigeria Union of Pensioners, staged a protest in Benin, the Edo State capital, against the non-payment of their pension arrears by the State Government.

The retirees are protesting the non-payment of arrears of pension ranging from 10 to 42 months. A Spokesman of the pensioners, Mr. Gabriel Osemwenkhai, said pensioners in the State had been experiencing hard times over the non-payment of their pension and gratuity by the Government. He said that some pensioners had died as a result of hardship. Osemwenkhai said pensioners involved comprised public servants, who retired in 2011 and owed by the State Government. The spokesman alleged that the State Government had refused to commence payment of the pension with effect from the date of retirement as stipulated in the Civil Service Pension Law. He said that the Government’s refusal to adhere to pension laws had led to a backlog of arrears owed to pensioners in Edo. Osemwenkhai said that their problem was further compounded by the dissolution of the State Pension Board. “At the moment, public servants retiring after the dissolution of the Pension Board are again stranded due to Government’s delay in processing their retirement papers; more than six months after their names have been removed from the payroll. “Rather than creating avenue for retirees to process their pension papers, Government has left this category of senior citizens in limbo, “he said. The State Chairman of NUP, Pullen Noruwa, said that members of the union had been made to live on a meager payment of N2,000 monthly, due to the non-harmonization of their pensions.

It was in the midst of the protest march that a middle-aged male protester, Peter Ayewoh, from Esan North-East local Government council slumped and gave up the ghost.

During the protest, labour leaders and members took turns to condemn the actions of the Edo State governor, Adams Oshiomhole, a former union president. “He came from us but he has used and dumped us,” said Comrade Edward Young Ilenikhena, the State chairman of the National Union of Local Government Employees (NULGE), to the protesters. “But there will be no retreat, no surrender until he pays us.”

The workers however debunked the Governor’s claims, describing him as “wicked” and a “liar.” The State and Local Governments’ shares a Joint Account from which the Governor made deductions in the time of boom but refuses to take responsibility now that there is a shortfall in revenue.

Oshiomhole’s claim of Local Government autonomy is unfounded. No Local Government Area in Nigeria has autonomy. In 2015 a move to amend the constitution and grant them autonomy failed as majority of State Governors through their Houses of Assembly opposed it.

Recently, National President of National Union of Local Government Employees (NULGE), Ibrahim Khaleel, was also in Benin in solidarity with the Edo workers. He slammed “the inhuman policies” of Oshiomhole and said that the national secretariat of the union has been relocated to Edo State. Khaleel disclosed that a meeting between labour leaders and Government officials ended in deadlock because of the “blackmail, intimidation and lies” by Gov. Oshiomhole.

In the same vein, Comrade Ilenikhena expressed disappointment with the Governor, Adams Oshiomhole, for the non-payment of their salaries arrears, adding that as a former labour leader, he should not be associated with such.

Paradoxically, Governor Oshiomhole approved the release of the sum of N120 million for market women, for supporting his administration, assuring them that his administration would continue to boost their businesses through ‘soft loans’. “It is unfortunate and insensitive for a Governor to deny the workers of their salaries, while he receives his own as at when due to care for himself and his families. And yet, the welfare of Government workers means nothing to him. This is beyond absurdity.

No evil is greater than denying a man the reward of his labour. Only time will tell...