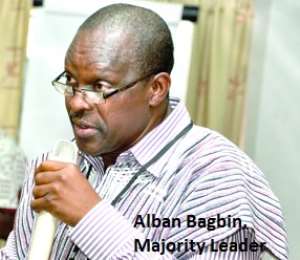 “The Coalition would like His Excellency to note that the failure to pass the RTI Bill this year, 2016, will mean firstly; the NDC Government has again lied not only to Ghanaians but to the International Community about its commitment to the passage of the RTI Bill.

Thirdly, the failure to pass the RTI Bill this year will mean that the NDC government cannot be trusted and that government's proclaimed commitments to the fight against corruption are mere words, without action,” it said.

Addressing the media in Accra last Thursday, the co-Chair to the Coalition, Mr Vitus Azeem, sought to prompt the Executive and Legislative arms of government that the RTI Bill had delayed for a longer time and needed authorization.

The Coalition, through its statement, also sought to draw the attention of the public to the fact that the passage of the Bill had delayed enough and that it would be proper if the legislators continued to work on the Bill and possibly pass it into law this year.

It said: “As at 28th July 2016, Parliament has only considered 29 clauses out of 157 clauses of the amendments proposed. The Bill was last considered on June 23rd and till date it is not clear why Parliament has decided not to proceed with the consideration process.”

According to the group, the Executive is doing nothing to ensure the Legislature worked on the Bill. They described as worrying, the silence of the Deputy Attorney General, Dr Dominic Ayine on the Bill, after he came from the 117th Session of the United Nations' Human Rights Committee in Geneva in June, this year, where he proclaimed that the RTI Bill will be passed this year.

“This provides grounds for the public to wonder whether Parliament and the powers that be are afraid of the light that a robust RTI law will throw on all aspects of public life and ensure that, those in whom the public trust is reposed carry out their function in a climate if transparency and are accountable to the sovereign people of Ghana.

“Most importantly and indeed more worrying is the outright proclamation made by government through the Deputy Attorney General, Dr Dominic Ayine, at the 117th Session of the UN Human Rights Committee in Geneva that the RTI Bill will be passed in July 2016.

Interestingly the Bill has not been discussed even once since his return from Geneva. Yet another failed promise,” the group noted.

“His Excellency, President Mahama, has indicated on many occasions that when the Bill gets to his table he would sign it into law without delay and that if the Bill is passed, his government would be reckoned as having passed the oldest Bill in Parliament.

“We will like our Parliamentarians to tell us whose interest they are actually serving. When loans are brought to Parliament, we see Parliamentarians turn out en-mass to endorse those loans so that government can borrow more money and put the country in more debt, however, the law that will give them the right information to enable them as well as the citizenry effectively scrutinize these loans and ensure that they are properly utilized has the support of only a handful of MPs. What excuse will our MPs give for not passing the RTI Bill in this sitting? They queried.

It, however, called on the Executive to engage Parliament to, as a matter of urgency, pass the RTI with the amendments before the current Parliament (6th Parliament) lapses in January 2017.