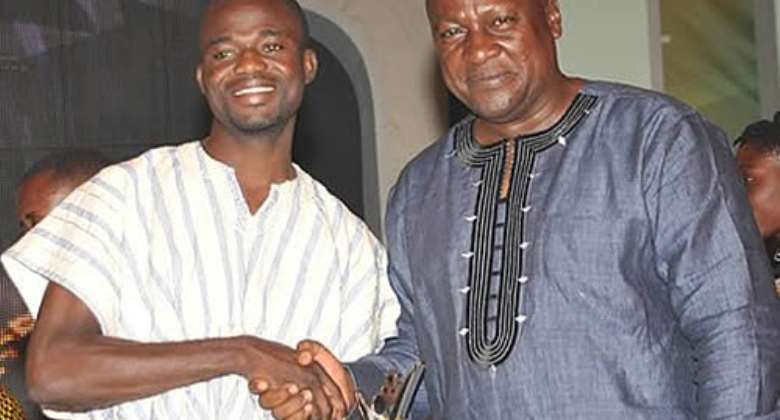 The leader of the ruling National Democratic Congress (NDC), President John Dramani Mahama has pledged an amount of Ghc13,000 for the first copy of the newly launched book authored by broadcast Journalist Manasseh Azure Awuni.

The launch ceremony which also happens to be Manasseh Azure’s birthday was attended and cerebrated by his family members, co-workers at the multimedia, government officials and well-meaning friends at the Christ the King Parish Hall in Accra.

The Deputy Communications Minister, Ato Sarpong, who also pledged an amount of Ghc2,000, said the President has since been an ardent follower of Manasseh’s many articles and stories on both the internet and radio.

Speaking at the launch ceremony, Ato Sarpong told Manasseh that the President says he admires his good works and appreciates his efforts as a journalist who is placing Ghana on the international map.

The President and his conduct recently became a matter of public discussion after Manasseh revealed in his investigative report that President Mahama, while a vice president, received a Ford Expedition vehicle gift from a Burkinabe contractor who had won a contract in Ghana.

The matter is currently being probed by the Commission for Human Rights and Administrative Justice.

According to the Deputy Minister of Communications, corruption is a canker not only found within the public sector as we perceived but also in the private sector.

He indicated that the act of corruption is usually induced by the private sector players which come in various forms such as kickbacks and gifts with the purpose of gaining an undue favour over others.

Ato Sarpong noted that corruption must be a fight for all irrespective of one’s political, social or religious status.

He added that journalists in the country have the prime responsibility of blowing the highlight on issues that borders on the development and peace of Ghana.

The Chairman of the occasion, Rev. Prof. Emmanuel Martey, Moderator of the General Assembly of the Presbytarian Church of Ghana said the Church, where Manasseh fellowships is proud of him for his exuberance and commitment to the journalist profession in his entire life.

He described Manasseh Azure Awuni as a moral philosopher who has combined both analytical and investigative ability in every aspect his new book.

Manasseh Azure’s book, “Voice of Conscience”, which catalogues his works between 2009-2012 is a reflection of 36 feature articles and investigative stories.