What A Trump Or A Clinton Presidency Will Mean For Africa 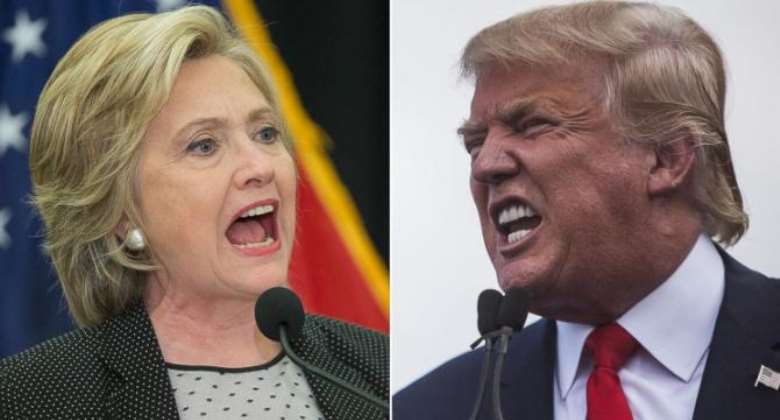 Barring any shattering political quake, it appears that Donald Trump and Hilary Clinton will slug it out the US November presidential elections.

That such a profoundly illiterate, shockingly ignorant and crass politician like Trump get to vie for the presidency of the world’s most important nation, should tell us that something is fundamentally wrong with American politics. But that is a story for another day.

If Trump was the unknown quantity that flummoxed the most adept of analysts, former Secretary of State Hilary Clinton suffered from no such ailment. She is definitely not new to Africa. In 2009, she followed her boss hugely-hyped trip to Ghana, with a whistle-stop trip to seven African trips. It is a trip designed to salve the bruised egos of leaders of countries that were miffed by President Obama's failure to see them on his first visit to the continent as president- Nigeria, South Africa, and Kenya are prime examples.

This year US elections threw up two very unsavory characters. Trump appears, talks and acts like an uncouth buffoon who emits only pure nonsense. Mrs. Clinton is an Establishment Figure, a blood-thirsty hawk believed to be firmly in the pockets of Bankers and the Military Industrial Complex honchos.

As pundits around the world busy themselves with the ritual of analyzing what the presidency of either candidate will mean for the rest of the world, their counterparts in Africa are also pontificating loudly on the possible outcome of the US elections, and what it portends for the continent.

One may argue that it is really a useless exercise, if we accept that the primary job of a US president is the protection and enhancement of the American Empire. No thanks to Mr. Putin and the Chinese, the Empire needs serious shoring up.

Sadly, African leaders continue to waste time on expectations of manna from Washington. Decades of been let down by unfulfilled promises from American (and Western leaders) appear not to dampen enthusiasm to keep on expecting miracle.

Africans adopted Barack Obama as their brothers. He came and wowed people from Accra to Cairo. He smiled nicely, made the right noises and made African leaders looked like village idiots in photo-ops. Obama will be remembered as the president that expanded US military occupation of Africa through the African Command (AFRICOM), and the killing of a siting African head of state, Muammar Gadhafi, and the destruction of Africa’s most developed nation, Libya. Today, under ‘Brother’ Obama, American troops are being sent to Libya, ostensibly to fight terrorism.

There is no denying the fact that the US continue to have a strong pull for Africans. Many well-educated Africans migrated to the US in the 1980s and 1990s with many of them becoming American citizens.

These Africans, like the African-Africans, continue to vote overwhelmingly for the Democratic Party. Many Africans continue to follow the lead of their cousins across the ocean to look at the Democratic Party with favor. The reasons are more emotional, than rational. While Ghanaians will scratch head to come up with one benefit they have derived from a Democratic administration, they can easily point to the George Bush jr. Expressway in their capital, Accra, as one tangible proof of a benefit derived from a republican president. Brother Obama failed to deliver on his flight of rhetoric.

Africa cannot remain an island. She must necessarily interact with the world. But it is time that African leaders jettison the archaic belief that international relations are based on sentimentalities, and stop believing that nice smiles represent solid friendship. It is time for them to fashion out and properly articulate the continents’ interests, and learn to pursue them with fervor.

It was Lord Palmerston who said that “We have no permanent friend or permanent enemy. Only our interest is eternal.”

This is a great lesson that African leaders refused to learn. That explains why they keep on getting the short end of the stick.

Instead of thinking of how to set the prices of their produce, for example, African leaders continue to beg for handouts.

In doing so, they make those that oppress and exploit Africa appear like saviours. They make those who destroy African lives, through proxy wars, look like those to salvage us.

And that is our tragedy.
Plug for Femi Akomolafe books
Femi Akomolafe is a Freelance writer, Author, Film & Video Documentary Producer, IT Consultant and Web-Designer.

His highly-acclaimed books (Africa: Destroyed by the gods,” and “Africa: It shall be well,” are now available for sales at the following bookshops/offices:

Where to buy them online:
Africa: it shall be well on Kindle books: https://www.createspace.com/4820404

Africa: it shall be well on Amazon books: http://goo.gl/QeFxbl

Africa: Destroyed by the gods on Kindle books: https://www.createspace.com/4811974

Africa: Destroyed by the gods on Amazon books: http://goo.gl/1z97ND

Get free promotional materials here:
1. Africa: it shall be well: http://alaye.biz/africa-it-shall-be-well-introduction-in-pdf/

A FREE Chapter of ‘Africa: It shall be well’ could be downloaded here: http://alaye.biz/africa-it-shall-be-well-a-free-chapter/

2. Africa: Destroyed by the gods (How religiosity destroyed Africa) http://alaye.biz/africa-destroyed-by-the-gods-introduction/

A FREE Chapter of ‘Africa: Destroyed by the gods’ could be downloaded here: http://alaye.biz/africa-destroyed-by-the-gods-free-chapter/

Kindly help me share the books links with your friends and, grin, please purchase your copies.