Independence was won, now South Sudan's freedom is in peril 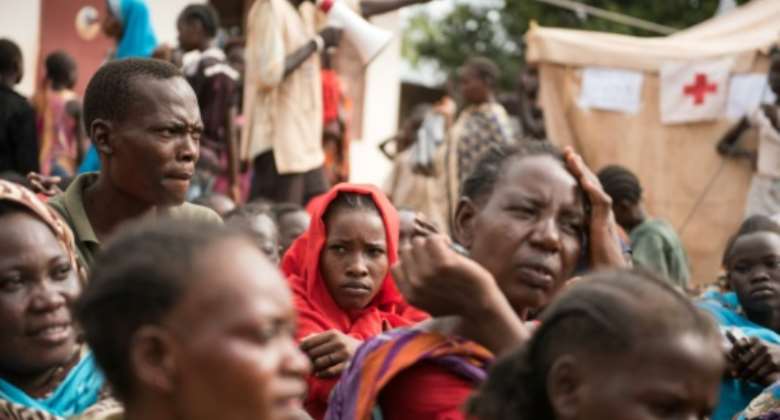 The UN says a total of at least 36,000 people have fled their homes in Juba since the latest bout of fighting erupted, while three quarters of the population need humanitarian aid. By Charles Lomodong (AFP/File)

Juba (AFP) - South Sudan journalist John Gatluak knew the risks of war: his radio station was destroyed twice but he never stopped broadcasting the news, even when hiding in swamps.

But the quiet, deeply committed journalist was shot dead on July 11 in the capital Juba, the latest in a string of killings and assaults on media and rights groups daring to criticise the leaders of a conflict that has driven the world's youngest nation to the depths of despair.

"Being a journalist in South Sudan is risking one's life," Gatluak said last year when his station in the war-ravaged town of Leer was looted again, according to a statement from his employer Internews, which supports media freedom.

"But I have dedicated myself to serving my community through radio as a watchdog, informing them about what the politicians are doing."

His wife gave birth to their third child the day after he was hunted down and shot at close range when his compound was stormed by gunmen.

The latest violence echoed the December 2013 start of the civil war with fighting starting in Juba, leaving in tatters a peace deal that was hoped would end the bitter conflict between President Salva Kiir and arch-rival Riek Machar, now vice-president in a so-called unity government.

Hundreds died in this latest spasm of violence, which began with a shootout at the presidential palace between men loyal to Kiir and Machar on the eve of South Sudan's fifth anniversary of independence.

Like many of the tens of thousands killed in a war that has divided the country along tribal lines, reports suggest Gatluak was targeted for his ethnicity.

Scars across his forehead marked him out as a Nuer, the same ethnicity as Machar.

Nine journalists have been killed since 2015, ncluding government cameraman Kamula Duro, who died after fighting erupted between rival forces at the presidential palace on July 8.

Bullets smashed into the popular Eye Radio station office in Juba, which continued reporting through some of the worst of the fighting.

Last year a reporter was shot in an apparently targeted attack, days after Kiir publicly threatened to kill journalists who reported "against the country".

The US-based Committee to Protect Journalists (CPJ) said the crackdown is just the latest in a string of efforts to muzzle the press, including beatings, threats, arrests and the closure of several newspapers.

For some, the latest violence is the final straw, but with security forces restricting South Sudanese men from using land borders or the airport, those who want to leave must risk using back routes to smuggle themselves to safety.

"The rest are in fear across the country," said CEPO, a civil society group.

Others have been arrested. Veteran journalist Alfred Taban was arrested on Saturday and his Juba Monitor newspaper closed after he wrote in an editorial arguing that South Sudan's leaders had "completely failed".

He is no stranger to arrest, having worked as a journalist in Khartoum before Sudan split in 2011, where he was repeatedly harassed for his support for an independent South Sudan.

Hassan Shire of East African rights group Defend Defenders called it: "another unacceptable attack on free speech at a time when the country needs it most".

Taban, who is in poor health, joins journalist George Livio, who worked for the UN-backed Radio Miraya in the town of Wau. He has been in detention since his arrest in August 2014.

Civil society leaders are also wary of speaking out.

"The system in South Sudan cracks down on anything that is not in accordance with the 'norm'," the author of the popular satirical Saakam website told AFP.

"It is understood... that if you are not in agreement with what they do, you must be an enemy -- or even worse -- a paid enemy. Not many have or will want to dare go into investigative journalism for fear of being gunned down as a spy."

Amid the gloom, Saakam's satire has continued to mock leaders with stories that provoke laughter but that are all too close to the bone.

"Former rebels intend to remain 'In Opposition' even if they democratically become majority in government," one satirical Saakam piece read.

"New S.Sudan states run out of new symbols, clash over old ones," another headline read, poking fun at how Kiir undermined the fundamental power-sharing pillar of the peace deal by nearly tripling the number of regional states.

But in a serious reflection, Saakam said the "real threat" to journalists and their families "cannot be overstated".

One recent post by Saakam highlighted a genuine message urging peace from the president of Somalia, a country that is a byword for anarchy.