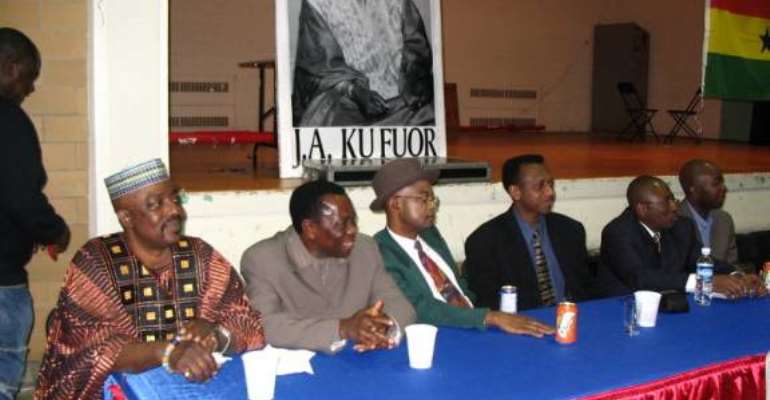 The Montreal and Toronto-Canada Chapters of the New Patriotic Party (NPP) held a glittering Victory Celebrations bash in Montreal on Saturday January 15, 2005. The event, dubbed as an “Electoral and Democracy Victory Celebration”, was held at the Center Le Manoir Banquet Hall in the Notre Dame De Grace District in West End Montreal. It was attended by members of the Ghanaian community in Montreal, a large delegation from the Cameroonian Community in Montreal, representatives from the Nigerian, Zimbabwean and Zambian communities. The Dinner-Dance bash featured a large variety of African dishes and music from DJ Tabi Amponsah of T-Connexion Soundz.

The Montreal Chapter Secretary of the Party, Michael Baffoe pointed out in his opening remarks that the Party's victory in the December Presidential and Parliamentary elections was worthy of celebration. “What we are celebrating tonight is not only our electoral victory but the stabilization of real democracy in Ghana made possible by the able leadership of our President, J. A. Kufour and the New Patriotic Party”, he said.

In his message to the gathering, Chairman Agbenyo noted that the NPP won another mandate in the last election in December because Ghanaians have faith and trust in the Party, its policies, its leadership and above all, its track record over the past four years. He expressed his deepest gratitude and appreciation to the Montreal Chapter for inviting the Toronto Chapter to participate in the victory celebrations. He noted that the two Chapters, located in the two largest cities in Canada, can achieve a lot in terms of generating and providing support for the Party in terms of ideas and logistics.

The Chairman of the Montreal Chapter Hans Peter Duah in his Victory Speech, admonished all overseas-resident Ghanaians to support the good work of the Kufour government to enable it provide better life for all Ghanaians both at home and abroad. “The air of freedom blowing across Ghana, the institution of the rule of law and due process, the stabilization of the Cedi and the lowering of inflation and interest rates and above all the bumper food harvest that have taken place in Ghana are not being enjoyed only by NPP members. Every Ghanaian citizen and residents of Ghana are enjoying these benefits devoid of Party and political affiliation”, he noted to a thunderous applause from the enthusiastic revelers”. He therefore entreated all Ghanaians to support the efforts of the Kufuor government. “Support for the government's on-going work at home is the collective responsibility of all Ghanaians”, he charged noting that when overseas-resident Ghanaians assist in making life better at home, pressure from family members and desperate early morning call will reduce drastically.

Chairman Duah also enumerated the active support that the Montreal local Chapter of the NPP has been providing to the Party at home which have included the presentation of seventy-five new bicycles worth over Thirty Million Cedis to the National Headquarters of the Party during the last electioneering campaign. He appealed to Ghanaians in Canada especially those living in Montreal and Toronto to register with their local NPP Chapters so that together we could all work hard to assist the development efforts going on in Ghana. He expressed the hope that we will have another opportunity in four years time to celebrate a more resounding victory in the next elections in 2008.

Ghana has enough grounds to terminate Sputnik-V procurement ...
9 minutes ago