Right to road must first go to pedestrians, non-motorised vehicles 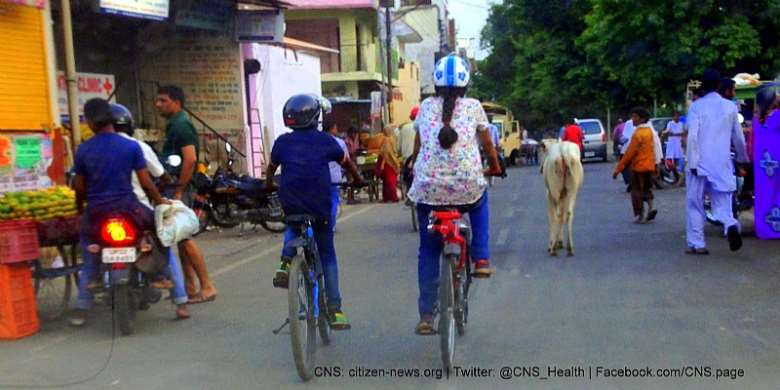 (CNS): "It did not strike me even for a second how fatal it could be for my child to ride a two-wheeler as a pillion rider - without a helmet. If I was conscious about the risk then I would have definitely given a helmet to my child" said the mother of a child who died in an unfortunate road accident in Lucknow in March 2016.

This child was a pillion rider along with her father while returning from her school. Her father survived the accident as he was wearing a helmet (but child was not) though sustained serious injuries. "Wearing a helmet on a two-wheeler for all riders can be lifesaving" said Sudhanshu Shekhar Upadhyay, one of the child's relatives and noted social activist.

Local accident but global relevance
Governments of UN member countries had committed to achieve Sustainable Development Goals (SDGs) by 2030 at last year's UN General Assembly, one of which (SDG 3.6) is to "halve the number of global deaths and injuries from road traffic accidents" by 2020.

Citizens need to hold governments to account that road accident deaths are declining locally on daily basis, and declining fast enough so as to meet SDGs on (or before) slated deadline.

Family members and relatives of those who died in road accidents had observed Sankalp Diwas in memory of this child (Titiksha Pathak) on 2nd July near Patrakarpuram crossing in Gomti Nagar Lucknow. Mr Sudhanshu Shekhar Upadhyay stressed upon making roads safer for children and adults alike. Helmets tailor-made for children are important if citizens want to observe traffic laws and protect their own health and family's well-being.

SHARE THE ROAD EQUITABLY
Dr Sandeep Pandey, Magsaysay Awardee and national vice president, Socialist Party (India) said: "Roads belong to everyone of us equitably. The right to road must first go to pedestrians (preference must be given to children, pregnant women, women and children, senior citizens, differently-abled people, etc) and non-motorized vehicles - only then people with motorized vehicles should get the right to road. Only exception to this could be in emergency cases such as for ambulances. VVIP culture promoting use of red and blue beacon cars must come to an end."

"UP Government has invested in constructing cycle tracks - citizens and authorities must ensure these are used by cyclists and pedestrians too. Authorities must ensure cycle tracks are not water-logged or clogged by parked two wheelers etc. On roads where there are no cycle tracks yet, one half of road should be reserved for to and fro movement of pedestrians and non-motorized vehicles, and the other half of the road be used for to and fro traffic of motorized vehicles" added Dr Sandeep Pandey.

Mr Sudhanshu Shekhar Upadhyay emphasized: "Helmets must be worn by all two wheeler riders (including pillion riders and children), speed limit must be strictly adhered to, people must drive in lanes and use horn only in cases of emergency. Use of pressure horns is banned yet big vehicles use pressure horns recklessly. Punitive action is necessary for those who use pressure horns."

Alcohol is a major cause of road accidents. Ban on drunk driving must be strictly implemented.

“Smart city is not a city in which everyone drives luxury cars rather a city where everyone - rich and poor alike - can comfortably use public transport” said Shobha Shukla, Executive Director of CNS.

Use of personal cars should be discouraged and private taxi can serve those who need personal cars. Car pooling must be a norm and not a rarity.

Dr Sandeep Pandey of Socialist Party (India) said that the Party believes in public transport: free ambulance, school buses and emergency services, vehicles with government departments should be used where necessary (like police, nagar nigam, etc), more women drivers should be employed in public transport, travel concession for women should also be given like it is given for senior citizens and children, no beacon vehicles should be there and one lane on a road must be reserved for bicycles and pedestrians.

I won’t be an impediment to free, fair and transparent elect...
20 minutes ago