President Kufuor to step down 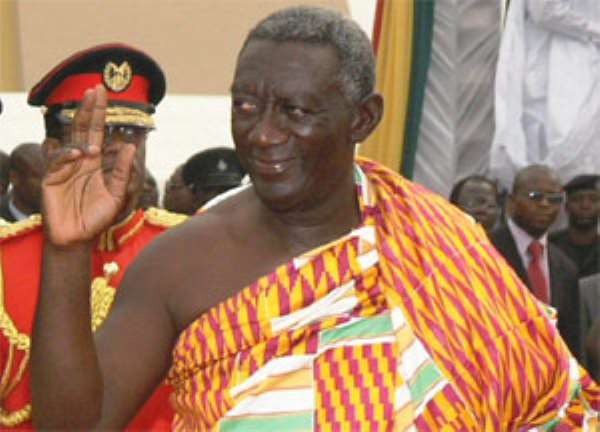 Accra - President John Kufuor will step down on Wednesday after two years at the helm of the Economic Community of West African States, leaving the thorny crisis in war-divided Ivory Coast to his successor.
Kufuor's tenure as ECOWAS boss was marked by significant accomplishments in peacemaking, helping to stabilise Sierra Leone and shepherding the peace process for Liberia through marathon negotiations in the Ghanaian capital.
"He has done very well, co-operating with his good friend (Nigerian) President (Olusegun) Obasanjo, the head of the African Union," said Accra-based political analyst Kwesi Jonah.
"It was important to him to do a good job, to show to the sub-region as well as to Ghanaians themselves that he was different from his predecessor, Jerry Rawlings - that he could bring peace to the sub-region but also to show himself as a man of peace."
As in Ghana, where he built his presidential platform on economic and trade reform, Kufuor paid close attention to the finances of a bloc which includes some of the world's poorest countries, renewing efforts towards the goals of economic integration that were the foundation of the 15-member bloc when it was born in 1975.
Last year ECOWAS reached a $4.5-billion infrastructure development agreement with the World Bank, helping to implement the ambitious program for Africa's development known as Nepad.
He also worked to revive the dormant ECOWAS fund, which aimed to authorise capital of $500-million in contributions from member states, and encouraged the boosting of trade ties across the bloc of 215-million people.
Kufuor pushed hard for progress in developing a second regional currency for the West African Monetary Zone, ahead of the eventual tying together of that currency, to be known as the eco, with the longstanding CFA franc used in eight west African countries.
Kufuor, 66, has been lauded for his careful stewardship of the Liberian peace process, cultivating ties with leaders from each of the three warring factions in the second of Liberia's two civil wars and playing a personal role in pushing former president Charles Taylor to accept exile in Nigeria, another ECOWAS member.
Riding the back of such successes into neighbor Ivory Coast, however, Kufuor - and ECOWAS - started strong but ultimately came up short.
Two years since a peace pact was signed, the Ivorian political foes have dug deeper into the entrenched positions that have divided the former powerhouse and plundered its cocoa-based economy.
ECOWAS mediators and peacekeepers have been pressed into service to resolve the thorny questions of identity, land ownership and nationality that have suspended normal function in Ivory Coast, to no avail. A string of ECOWAS summits have failed to yield a workable compromise.
Kufuor's decision in late 2004 to step back from his international commitments to focus on his re-election campaign, which wound up with a decisive win in December polls, only underscored the inability of ECOWAS to successfully navigate the Ivorian crisis.
"Everything went horribly wrong when (Ivory Coast President) Laurent Gbagbo breached the peace (with November air strikes on the rebel north), showing his lack of willingness to cooperate with ECOWAS and with President Kufuor," Jonah siad
"Normally, President Kufuor had been able to restrain Laurent Gbagbo but the timing this time was wrong; President Kufuor was focused on the election and Laurent Gbagbo took advantage of the lapse in communication."
Mediation efforts have since been handed over to the AU and President Thabo Mbeki of South Africa, who has put forward a roadmap aiming to reconcile the divided country ahead of elections set for October.
And the chairmanship of ECOWAS looks set to be passed to Mathieu Kerekou, president of Benin, who has played a minor role in resolving the Ivory Coast crisis that threatens to reverberate economically and politically across the troubled region.