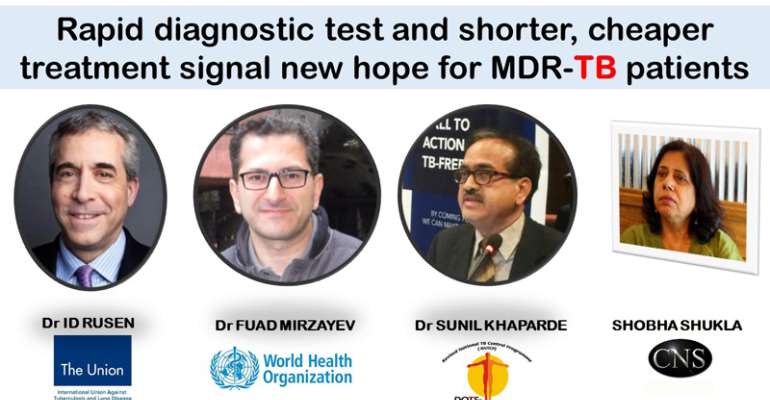 WHO recently announced new recommendations to speed up diagnosis and improve treatment outcomes for multi drug resistant TB (MDR-TB) through the use of a novel rapid diagnostic test called MTBDRsl, and a shorter, cheaper 9-12 month treatment regimen. The new treatment regimen can be completed in 9-12 months— less than half the time required by the current 24-month treatment standard used worldwide.

Costing less than $1000 per patient, this new regimen is not only much less expensive than the current standard regimen, but it also reduces the duration of treatment by 12 to 15 months. It is expected to dramatically improve the current low cure rate and potentially decrease deaths due to better adherence to treatment and reduced loss to follow-up. MDR-TB is defined as TB that is resistant to at least rifampicin and isoniazid—the two most effective drugs for treating drug sensitive TB. Resistance generally stems from inadequate treatment or improper use of medicines. MDR-TB can also spread directly from one person to another. MDR-TB is difficult and expensive to treat, and can also be fatal. According to WHO’s Global TB Report of 2015, 5% of all global TB cases are of MDR-TB. This translates into 480,000 cases every year. Only 25% of these are detected and put on treatment, and only 50% of those treated are cured.

In a recent webinar organised by CNS (Citizen News Service) on this important issue (see recording: www.bit.ly/june16-recording ), Dr Fuad Mirzayev, Medical Officer at the WHO Global TB Programme, clearly spelled out the WHO recommendation— “A shorter MDR-TB regimen of 9-12 months may be used instead of the conventional regimen in adults, PLHIV and children with rifampicin resistant TB (regardless if isoniazid resistance is confirmed or not), who have not been previously treated with 2nd line drugs and in whom resistance to fluoroquinolone and 2nd line injectable agents has been excluded or is considered highly unlikely, It is NOT recommended for patients with 2nd line drug resistance, or with extra pulmonary TB, or for pregnant women. In such cases individualised conventional MDR-TB regimens should be used.”

To rule out resistance to second-line drugs—a critical prerequisite for eligibility of MDR-TB patients for the shorter regimen, WHO recommends the rapid diagnostic test MTBDRsl that gives results in just 24-48 hours. This DNA-based LPA (line probe assay) identifies genetic mutations in MDR-TB strains, that make them resistant to fluoroquinolones and injectable second-line TB drugs. Evidence review for shorter MDR-TB regimen was based on meta-analysis of results of initial programmatic studies conducted by The Union, Damien Foundation, Médecins Sans Frontières (MSF) and the Antwerp Institute of Tropical Medicine in Belgium, involving 1205 patients with uncomplicated MDR-TB. Data for 515 patients under the Damien Foundation pilot programme, using a 9 month treatment regimen in Bangladesh, shows a cure rate of 82.1% and overall success rate of 84.5%.

This study was followed by the Union coordinated first multi-country MDR-TB patient cohort study of 1000 patients in 9 countries of West Africa (Benin, Burkina-Faso, Burundi, Cameroon, Côte d’Ivoire, Central African Republic, Niger, Democratic Republic of Congo and Rwanda), treated with a modified Bangladesh regimen. Dr ID Rusen, Senior Vice President, International Union Against TB and Lung Disease (The Union), shared that, “Interim analysis of 408 patients has demonstrated 82.1% treatment success rate, demonstrating that the 9 month regimen can be successful in other environments than Bangladesh, and also in settings with high HIV prevalence”.

Currently on going is the Union-sponsored and USAID supported STREAM study (Standardised Treatment Regimen of Anti-TB Drugs for Patients with MDR-TB) to evaluate other shortened regimens for patients with MDR-TB. STREAM Stage 1 study has been ongoing in Ethiopia, South Africa, Vietnam and Mongolia, and results are expected in 1st quarter of 2018. STREAM has recently expanded to test two additional shortened treatment regimens using bedaquiline, a new medicine produced by Janssen Pharmaceuticals. This expanded arm will evaluate a 9 month all–oral regimen, that does not require painful injections, and an even shorter simplified 6-month regimen. This STREAM Stage 2 study envisages to enroll 1155 patients in at least 10 countries by end of 3rd quarter of 2018 and initial end point results expected in 3rd quarter of 2020, informed Rusen. WHO’s recommendation will have profound implications for countries like India that are beset with the epidemic of MDR-TB. The adoption of a shortened regimen will not only reduce the burden on patients and on healthcare systems, but also improve cure rates.

Dr Sunil Khaparde, Deputy Director General of Revised National TB Control Programme, Ministry of Health and Family Welfare, India, conceded that India has the highest TB burden (2.2 million cases every year) and highest MDR-TB burden also with 72,000 MDR-TB cases every year and only 28,000 of these are treated. He said that the new shortened regimen holds a lot of promise and will be more rational and cost effective for India. “The conventional treatment takes at least 18-24 months to complete and has only 50% cure rate. Patients find it difficult to take the very toxic 2nd line drugs for such a long period. This prolonged treatment period creates adherence problems and often results in treatment interruption and loss to follow up. The new regimen will definitely improve adherence and hence cure rate,” he said.

Although formal clinical study for the shorter regimen has not been conducted in India, but Khaparde assured that very soon the proposal for roll out of this new regimen will be put up before the expert committee. José Luis Castro, Executive Director at The Union, has rightly remarked that, “Statistics clearly show that MDR-TB is an increasing burden and much of this is due to a failure of basic TB control. The international TB community must advocate for investment in the expansion of quality basic services and preventative care on the frontline where it matters most. The onus is on us all to ensure that access to correct treatments, both for patients and health care providers, increases exponentially.” Countries need to move quickly to implement the new regimen by formally incorporating it into their national TB guidelines. Accurate and early diagnosis along with shorter, cheaper and more effective treatment can help countries deliver on their promises to end TB by 2030 or earlier as envisaged in Sustainable Development Goal 3.3.

(Shobha Shukla is the Managing Editor at Citizen News Service (CNS) and has reported on global health related issues consistently for decades. Follow her on Twitter: @CNS_Health)