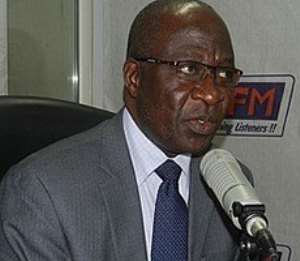 The Director of Research for the National Democratic Congress (NDC) says a call by the Progressive People’s Party (PPP) for President John Mahama to step down for receiving a vehicle from a Burkina contractor will not wash.

Dr William Ahadzie advised the PPP to shelve its scheme to ride on the controversy surrounding the Ford Expedition presented to the President for political gains.

“We still insist that this is a non-issue and they want to seek political relevance,” said Dr Ahiadzie.

The NDC Research Director was reacting on Top Story on Joy FM to a call by the PPP that the President, Friday.

PPP Chairman, Nii Allotey Brew-Hammond, said the President cannot be trusted to sign corruption-free contracts in an election year after he received a gift from a contractor who is doing business with government.

The Burkinabe contractor, Djibril Kanazoe, says he presented a Ford Expedition – valued at $100,000 – to the President as a gift.

Communications Minister, Dr Omane Boamah, has confirmed that the President received the gift, but explains the luxury vehicle has been added to the Presidential pool of cars.

He says the gift did not influence the decision to award Mr Kanazoe the contracts he was awarded.

The contractor was awarded the Dodo Pepeso-Nkwanta road contract, worth €25.9 million in 2012, the year in which he gave the gift. That was before he was given a $650,000 for the construction of a wall in Ghana's mission in Burkina Faso.

Government was also in the process of awarding a GH¢82 million contract on a sole sourcing basis for the construction of a 28-kilometer road at Hamile close to Burkina Faso but the contractor has since backed out of the contract following the revelation.

The PPP and other commentators have sought to say acceptance of the gift has violated laws that govern public office holders and does same to the President’s own code of ethics to Ministers.

Dr Ahadzie says the PPP's call for President Mahama to step aside is only an opinion that is only being presented to Ghanaians as having a legal basis.

General Secretary of PPP, Kofi Asamoah Siaw, who also spoke on the matter on Top Story said Dr Ahadzie's stance was unfortunate, promising that the NDC has not heard the last of it.