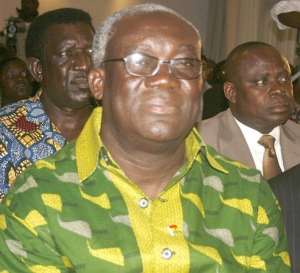 By Kwabia Owusu-Mensah, GNA
Kumasi, June 16, GNA - Mr Kofi Asamoah, Secretary General of the Ghana Trades Union Congress (TUC), has warned the leadership of organized labour to remain alert to prevent political infiltration of the workers' front ahead of the general election.

He said as the nation inched closer to the polls and the political temperature began to rise, it was important to resist the temptation to join the fray and dabble in partisan politics, something that could weaken the unity and cohesion of the labour unions.

He asked that union leaders at all levels did everything to avoid this and to make sure that they did not promote the interest of any political party.

He entreated them to concentrate on ways to strengthen the voice of the Ghanaian worker to assure them of improved conditions of service.

He stated that politicians had over the years burdened workers with harsh economic policies and programmes, which had deprived them of better working conditions and improved livelihoods.

Majority of Ghanaian workers continued to work under deplorable environment while others lived in abject poverty, he added.

Reversing the trend, Mr. Asamoah said, should become the prime concern of trade unionists and that they should direct their efforts and energies towards influencing policies to promote the well-being of workers.

He underlined the need for them to work together to protect the peace and harmony of the society.

He called on GAWU members 'to unite and organize' to recruit more members, especially from the informal sector to increase their numbers.

Mr. Asamoah also urged the leadership to resist any inimical policies by the government that would lead to further decline in the performance of the agricultural sector.

He said the downturn of agriculture should be of concern to everybody, given the likely negative impact on employment and food security.