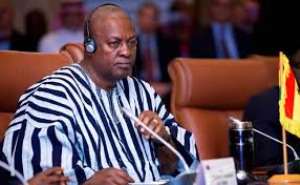 Member of Parliament for Atwima Mponua, Isaac Asiamah, says President John Mahama stands accused of bringing disgrace to the high office of the presidency with his decision to accept a bribe from his Burkinabe friend and contractor.

The MP is, thus, calling on the president to resign for not acting per the oath he swore to be the leader of this country, and for accepting a Ford Expedition car from the contractor he assisted to obtain contracts to execute for the country.

Djibril Kanazoe gave the car to President Mahama after he had won and executed the contract to construct fence wall around of a piece of land in Burkina Faso belonging to the Ghana’s Mission in the country. The project cost of $656,248.000 was described by many as very outrageous.

According to Mr Asiamah, the Public Accounts Committee of Parliament, through a report from the Auditor-General, made the house know that the state, on behalf of President John Mahama, had been involved in a fraudulent act.

He recalled in a radio interview that the Ministry of Foreign Affairs and Bank of Ghana were invited into Parliament to be part of the discussion to clarify the issue that had come up.

It was in this meeting that the house got to realize that the state has paid some money to Ghana mission in Ouagadougou, Burkina Faso to be used for the construction of a fence wall.

He explained: “The money involved amounted to Six Hundred and Fifty Six Thousand, Two Hundred and Forty Eight Dollars ($656,248). In fact, we were all surprised about how such a huge amount would be used for such a project on behalf of this nation when there are a lot more important things to be done in the country. We never understood and asked for further explanations from both the Bank of Ghana and the Ministry of Finance, but have not up-till date received any breakdown.”

In the view of the MP, “This is an issue that should not be left unexplained especially when the president has recently declared himself as a clean man when it comes to corruption matters; this shows the kind leader we have.”

Meanwhile, the Minority Spokesperson on Constitutional and Legal Affairs, Joe Osei-Owusu, insists the car gift given to the president was a bribe to influence him to give out juicy contracts to his friend.

In a number of radio interviews, he described the president’s acceptance of the car gift as a “shameful” and “corrupt” act, which is impeachable.

"The man [contractor] is getting favours as a result of the kickbacks he has paid to the president. We should keep telling Ghanaians that the president is corrupt and taking bribes for petty things like this,” he said on Class FM.

According to him, President Mahama “should not have even encouraged that kind of relationship such that the person will deliver a vehicle intended for you in Burkina Faso and then it will be driven through the borders with official letters requiring that the vehicle be allowed because it is a gift…I mean it is shameful. Was the gift intended for the state? And it was received by him, not the state. It is not registered in the name of the state, I guess.”

Also, in the view of Lawyer and Criminologist Prof Ken Attafuah, the president cannot be extricated from a scandal in which he has been accused of receiving a Ford Expedition from a private contractor.

He says the conduct was a "palpable violation" of the code of conduct governing public officers.