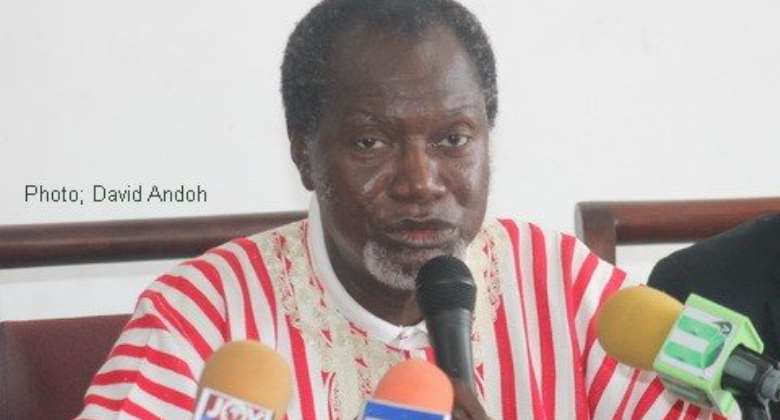 The Progressive People's Party has waded into the presidential Ford Expedition gift scandal demanding that president Mahama steps down ahead of the 2016 elections.

Even before he does, the party is also insisting that the president should not sign any contract before the election and must subject himself to public inquiry.

At a press conference held in Accra, Friday, Chairman of the party Nii Allotey Brew Hammond, said a president whose party justifies the receipt of a $100,000 Ford Expedition gift from a contractor who is doing business with government cannot be trusted to sign corruption-free contracts in an election year.

Background
The president has come up for criticisms amongst some Ghanaians following an investigative report by Joy News' Manasseh Azure Awuni which suggested the president received a car gift from a Burkinabe contractor.

The Communications Minister, Dr Omane Boamah did not deny that the president received the gift, except to explain that the gift was added to the presidential fleet.

He also stated that the gift did not in any way influence the decision to award Mr Djibril Kanazoe the contracts he was awarded.

The contractor was awarded the Dodo Pepeso-Nkwanta road contract, worth €25.9million in 2012, the year in which he gave the gift. He had already been given a $650,000 for the construction of a wall in Ghana's mission in Burkina Faso.

The government was also in the process of awarding an GHc82 million contract on sole sourcing basis for the construction of a 28 kilometer road at Hamile close to Burkina Faso but the contractor has since backed out of the contract following the revelation.

The story has become a subject of controversy with some defending the president for collecting the gift and others criticising him for same.

The PPP is part of the army of critics who believe there was a lapse in judgment in the president's decision to accept the gift.

The party said the president's action has dented the image of the country and must take steps to purge himself.

"The president must take immediate steps to redeem his image and that of the country.

"We therefore demand an immediate apology to the good people of Ghana for bringing shame and embarrasment to our dear country.

"The publication of his assets declaration forms completed before and after he became a Member of Parliament, Minister of State, Vice President and as president," he said.

He insisted the president must also submit himself to a public inquiry to allow for a full public disclosure on the circumstances that led to the award of the contract and the giving of the gift.

Nii Hammond said the president must admit that he is unable to fight corruption and must refuse to contest the November election on the ticket of the NDC.

He also demanded a freeze in the award of contract in an election year.

"The PPP is giving notice that an administration that justifies such gift taking cannot be trusted to give clean contracts during an election and will not accept any new contract given by this administration when it assumes office," he pointed out.