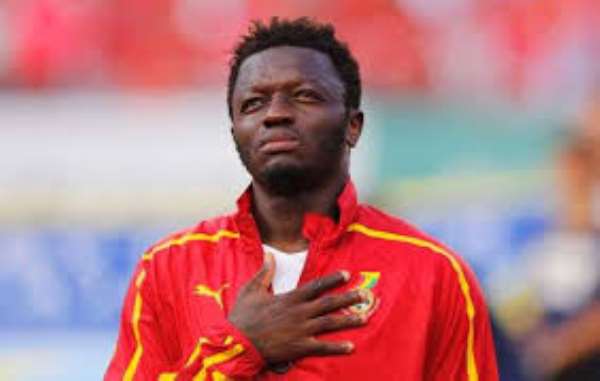 According to multiple media accounts, Sulley Muntari an ex-national soccer team player has finally, albeit belatedly, come to his senses and offers formal apology to Ghanaians for his (usual?) violent tantrums this time resulting from the role he played during the players’ unpaid bonus outcry at the 2014 World Cup event in Brazil. Ghanaians may recall that GFA suspended Muntari indefinitely from playing for the national team for his insubordination and violently punching one of the Ghana’s soccer officials at the team’s base in Maceio, Brazil. The whole shameful and bestial incident happened about two years ago; and, it appears almost all Ghanaian soccer fans have forgotten about it now.

Perhaps one of the best explanations for the fading memory is that at the time of the infamous bonus uproar, many peace-loving Ghanaians expected and even tried to appeal to Muntari to apologize to the entire Ghanaian football fans owing to the uproar’s global embarrassing implications but Sulley disdainfully ignored the calls. The appeal might have fallen on his deaf ears because Sulley Muntari seemed to have a lot on his plate as far as his soccer career was concerned at the time. So, he didn’t have the need to and any sense of urgency to apologize to the supportive Ghanaians and kept remaining defiant for the past two years till now.

The question worth posing is why now? Why does it take Sulley Muntari two long years to realize that he owes Ghanaian people apology and a show of respect and remorse? On what justifiable ground(s) Sulley Muntari had for allegedly soccer punching the Black Stars’ official back then? It doesn’t matter how right the players were regarding their bonus grievances in Brazil, none of them has any right under that circumstance to hit or punch anyone, period!

There are many civilized routes for seeking redress without embarrassing the entire nation whose material and moral support have immensely made it possible for many of these national team players to be on the international soccer pedestal today of which Muntari is a classic beneficiary. As a national soccer team player of his stature, Sulley Muntari by default is a role model whom millions of Ghanaians look up to in terms of promoting certain high behavioral standards on and off the football field. However, his signature hot-tempered and indiscipline attitudes over the years fall short of those disciplinary thresholds.

Now it seems Muntari needs the Black Stars’ platform, on top of the gullible local soccer fans’ support to fire up his fast waning professional soccer career once more hence his latest remorseful antics toward Ghanaians. He could have done this long time ago to remove any doubt about the sincerity of his contrition, but failed to do so in the face of all the appeals and advice from many of his well-wishers. Again, why now? The timing of Muntari’s apologetic tour strangely coincides with the period in which he has been offloaded and not connected with any top-flight European football club.

One wonders if Muntari will still offer apology today if he is at his career peak like Andre Ayew or currently playing for a big team like Barcelona, Real Madrid, Chelsea, or Manchester United. Judging from his past behavior and contemptuous attitude toward authority, it’s highly unlikely Sulley Muntari would have shown any regret for what he did in Brazil. Like Muntari, no one is perfect. We all make mistakes as mortal human beings; but, how we react and address the “mistakes” we have committed tell a great deal about our true intentions or motives. In this case, Muntari’s scornful defiance after his violent behavior in Brazil spoke a lot about his uppity disposition and how he views his fellow Ghanaians.

So, as the Ghana FA is about to respond or deliberate, if it hasn’t done so yet, on the substance or the semantics of Sulley Muntari’s letter of contrite, many of us are hopeful and wish that GFA accept Sulley Muntari’s belated apology in good faith. Nonetheless, the acceptance of the apology shouldn’t lead to allowing him to play for the Black Stars again. GFA must know by now that considerable bunch of Ghanaians strongly believes that the absence of Sulley Muntari or Kevin Boateng in the Black Stars’ camp is a good omen for the fortunes of the team’s discipline. Sulley Muntari may be an experienced and skillful soccer player Ghana has ever seen, but that doesn’t make him indispensable. Ghana has had higher-quality and humble footballers such as Abedi Pele, Tony Yeboah, Ahmed Polo, Kwasi Appiah, and the like but all of them are gone and yet the Black Stars is still around with a new set of talented and determined players. This means Ghana is bigger than any one “experienced” player.

Plus, succeeding in any human endeavor is not only about talent and experience but also it’s about good work ethics, behavior, and self-discipline. One of the main reasons Ghana and for that matter Africa lag far behind the Western nations in all departments of development is because our part of the world lacks culture of self-discipline and good work ethics. Admittedly, sports authorities in (say) Britain would not create any dishonest atmosphere that would probably lead to violent response like the one perpetuated by Sulley Muntari in Brazil in 2014. Yet, assuming Muntari is British or Israeli and had violently punched any English or Israeli national soccer official, I don’t think they would be discussing about how “experienced” he is. His apology is welcome but the current Black Stars need more dedicated, humble, and discipline players. Sulley Muntari has consistently proven that he lacks those basic qualities and the corrupt GFA ought to seriously take that into account in its deliberations.

The writer is based in the United States and can be reached at: [email protected]

A/R: Journalists on tour with Regional Minister involved in ...
39 minutes ago

Focus on promoting human rights, be swift and fair in applic...
41 minutes ago