We Will Not Tolerate Any Acts Of Violence 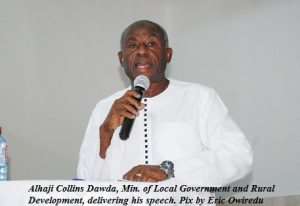 The District Chief Executive (DCE) for Kadjebi has cautioned the people of the area to comport themselves during and after the November elections, since the District Security Council (DISEC) will not tolerate any acts of violence.

Mr. Jacob Asonkonde, therefore, urged the people, particularly the youth, to tolerate opposing views during the period to help promote peace in the District.

Mr. Asonkonde noted that the beauty of democracy bothered much on tolerance of opposing views, observing that the country had so far made conscious efforts to deepen democratic practices over the years, which should be guarded.

The DCE, who was speaking at a stakeholders meeting on the short term Sustainable Development Goals of the Assembly at Kadjebi also advised  the gathering not to regard the forthcoming general election as “ a do or die affair”.

“So long as Ghana has embraced democracy, elections would be organized to elect a leader for the country after every four years and in such an election, there would always be a winner and a loser; however, the core mandate is to bring development to the people just as President Mahama has committed himself to the development of our communities,” he stressed.

Mr Asonkonde challenged the youth to take advantage of the existing peace in the area to explore available economic opportunities, especially agriculture, as a business to create jobs for themselves.

Again, he said it would enable them to enjoy comfortable lives and also contribute meaningfully towards socioeconomic development of the country, stressing that government had created a peaceful environment for all to go about their work without any difficulty.

Mr. Robert Hobenu, the Kadjebi District Coordinator of the National Disaster Management Organization (NADMO), noted that rapid development could be achieved in every community if the people adhered to environmental protection practices.

According to him, the rampant destruction of the vegetation through human activities was creating numerous problems that affected the sustainable medium term action plan of the Assembly – a development he said led to the destruction of water bodies that served as a major source of water for communities in the District, as well as the forest.

He thus called for pragmatic efforts to reverse the trend.

The NADMO coordinator appealed to the people to take seriously, matters of sanitation, gender equity and women empowerment, adding that the Assembly should strictly enforce by-laws to deter people from carrying out activities, which were inimical to the development aspirations of the District.

He suggested the formation of a market management committee to drive away women who sold their wares by the roadside into the market, to help prevent future accidents and also ensure that the people paid their taxes to generate adequate revenue for the Assembly.

Arguing that rice farmers had been neglected for far too long, Mr. Hobenu implored the District Directorate of Food and Agriculture to provide extension services those of them in the area to boost the production cereal, as was being done to cocoa farmers in other parts of the country.

The Kadjebi District Director of Education, Mr. Gasper Hospeson Tetteh, on his part, called for a vibrant School Management Committees (SMCs) and Parent-Teacher Associations (PTAs) to enable his outfit to deliver more effectively.

He hinted that the PTA would make them more interested in school activities, saying effective education delivery would become meaningless if stakeholders in education failed to play their respective roles and only allowed government to continue providing infrastructure for schools.

I Wish You Die In Prison — Judge To Convict Who Defiled His ...
55 minutes ago