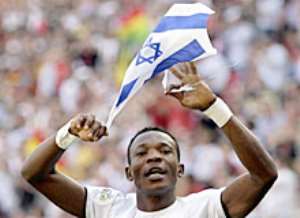 A former Black Stars defender, John Paintsil, has been granted bail in the sum of GHc 5,000 by an Accra Circuit court, after he was held and arraigned for assault a fortnight ago.

The former Fulham and West Ham player was said to have slapped Deputy Superintendent of Police (DSP) Emmanuel Basintale in the right eye, while he was being interrogated by Superintendent William Dzamesi for a case of car theft reported against him by his wife, Richlove Paintsil.

The court, presided over by Patricia Quansah, granted him bail in a sum of GHc 5,000 with one surety. Paintsil is expected to reappear before the court on Thursday, July 14, 2016 for trial to commence. John Paintsil, was represented by Samil Ibrahim.

Facts
According to the prosecutor, Chief Inspector David Galley, the complainant in the case is Deputy Superintendent of Police (DSP) Emmanuel Basintale who is the District Commander of East Legon Police Station. The accused person is a footballer residing at East Legon, a suburb of Accra.

He said on the 22nd of May, 2016, Richlove Paintsil, reported to the East Legon Police that her husband had stolen her car.

The accused person was invited to the police station on 23rd May, 2016 and put before the Crime Officer, DSP Berlinda Banini who instructed him to produce the car and its documents at the station on May 24, 2016, for further investigations into the case.

Chief Inspector Galley told the court that on May 24, 2016, the accused person came to the station without the car, where he and the wife were paraded before the police District Commander in his office for interrogation and directions.

In the course of the interrogation, the District Commander asked the accused person to bring the car to the police station for safe keeping, to enable them conduct further investigations into the case, since both were claiming ownership.

The prosecutor said the arrangement did not go down well with Paintsil, who flared up and hurled insults on the District Commander, accusing him of being bias, unprofessional and had taken side in the case.

He continued that it was the second time that the Commander had shown unprofessional conduct towards him.

The Commander at that point ordered the investigator to arrest and escort him to the charge office to be detained. He then got up and doubled his steps and left the Commander's office into the corridors.

He said, the investigator pursued and tapped him to stop, but he angrily pushed him away. When the District Commander intervened, Paintsil gave him a heavy blow on the left eye which became red and swollen.

Chief Inspector Galley said the District Crime Officer then raised an alarm which attracted other police personnel around who rushed to the building and assisted the Commander.

The accused person was then arrested and detained in the cells for investigations, after the District Commander made a case of assault, causing harm, threat of harm and offensive conduct against him.

The victim was then issued with police medical form to attend hospital, whilst the accused hurled insults on the District Commander that, he was flirting with his wife and that he was useless and a foolish police officer.