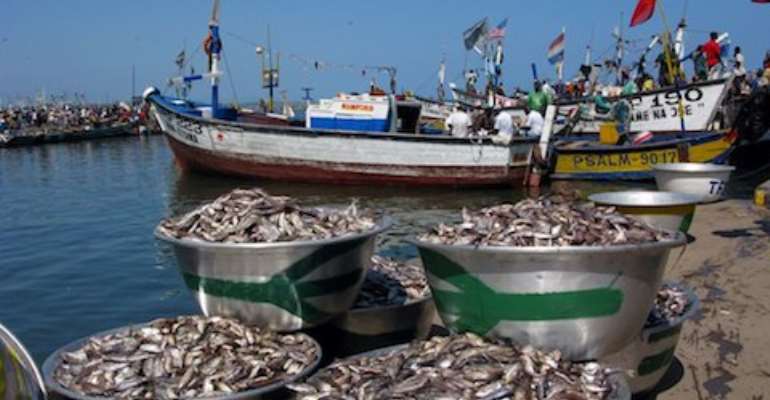 By Felicia Yeboah-Akpoh, GNA
Takoradi, June 13, GNA - The Western and Central Regional branch of the Journalists Fisheries Group (JFG), have called for rigid enforcement of the fisheries law to ensure compliance by fishermen in order to protect the dwindling fish stock.

They said reports indicate that some fishermen continue to engage in illegal, unregulated and unreported fishing, using unapproved fishing nets, explosives and light as well as trading of fish at sea, 'Saiko', a practice that tend to draw all species of fishes including the juveniles which deplete the fish stock at sea.

The JFG made the call at a day's workshop on sustainable fisheries aimed at complementing the efforts of the authorities to find solutions to the dwindling fish stock leading to high price of fish on the market.

The workshop was organised by the 'Hen Mpoano', a local based non-governmental organisation that has focus on sustainable fisheries management with support from the BUSAC fund.

It was held on the theme: 'Putting fisheries at the fore of policy discussion in election 2016, role of the media.'

The journalists noted that the government is doing its best in the sustainable fisheries management by providing the fishermen with fishing gear such as outboard motors and premix fuel to undertake sound expedition to increase production.

They however, questioned how these could materialise if fishermen continue to engage in orthodox fishing which is detrimental to the sustainable fisheries.

They called for the adoption of 'closed season' that would help in the replenishing of the stock at sea against the lean season to enable the nation have all year supply of enough fish on the local market.

The situation in the fisheries sector has compelled Chief fishermen in the Nzema East, Ellembelle and Jomoro districts to take their destiny into their own hands by banning the use of light for fishing to protect the sea because according to them the law was not working to perfection.

Nana Kofi Annan, Chief Fisherman of Axim claimed the move is working and called on their colleagues along the coast to emulate them.

Mr Kofi Agbogah, Executive Director of the Hen Mpoano urged journalists to be conversant with the fisheries law and intensify their reportage on fisheries management to enable fishermen appreciate the harmful practice they cause to the marine creatures.

He expressed regret that unreported fishing is a great loss to the fisheries industry and the nation as revenue that should go to the state end up in individual pockets.

Mr Cephas Asare, of the Hen Mpoano briefed participants on the saiko practice at sea saying it contravenes local and international fisheries law therefore urged fishermen to refrain from practicing it.

Saiko is the practice where by-catch collectors use modified boats, go to sea without nets to collect or buy fish (mostly juvenile fish) from trawl vessels sometimes in exchange for money, and other material things.

The participants advised the members of Fisheries Enforcement Unit not to settle cases of fisheries by offenders but refer them to the law courts so that the fines would go to the national coffers.

Mr Daniel Awuku-Nyanteh of the Fisheries Protection Office suggested the establishment of offices at the shores to enable officials work efficiently.