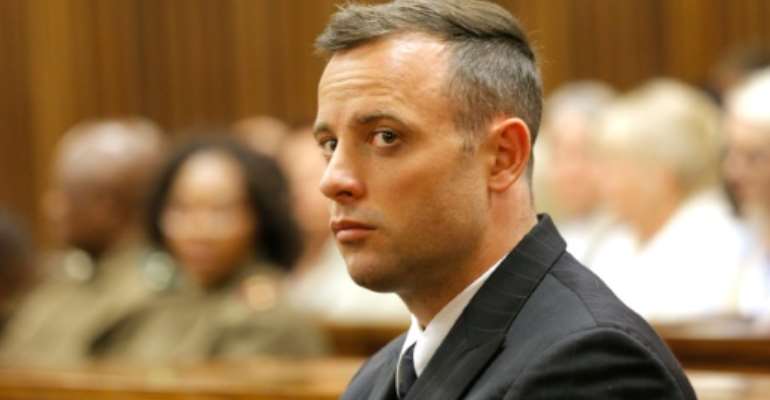 Pretoria (AFP) - Reeva Steenkamp's father broke down in court on Tuesday as he told a dramatic sentencing hearing that Oscar Pistorius must "pay for his crime" for murdering his daughter three years ago.

The Paralympic athlete killed Reeva Steenkamp, a model and law graduate, in the early hours of Valentine's Day in 2013, saying he mistook her for a burglar when he fired four times through the door of his bedroom toilet.

In March, Pistorius's lawyers failed to reverse an appeal judgement that upgraded his original conviction from culpable homicide -- the equivalent of manslaughter -- to murder.

"It has been very difficult for me to forgive... I feel that Oscar has to pay for what he did. He has to pay for his crime," Barry Steenkamp, 73, said shaking with emotion and in tears.

Reliving how his daughter, 29, died, he said: "What she must have gone through in those split seconds -- she must have been in so much fear and pain. That is what I think of, all the time."

"It must have been absolutely awful."

He also said that he believed the couple had argued on the night of the murder -- disputing Pistorius's claims.

Pistorius had his head in his hands and appeared to be sobbing during the testimony at the High Court in the South African capital Pretoria.

Barry Steenkamp, a former racehorse trainer, described the chaos and panic when his wife June rang him at work early in the morning after Reeva was shot.

"June grieves like I do all the time. I hear her at night, I hear her crying, I hear her talking to Reeva," he said, adding that June had tried to forgive Pistorius to help her cope with the loss of her daughter.

"You must still understand that he must pay for that although June has forgiven," he said, adding that he might want to meet with Pistorius in the future in private.

The original trial judge Thokozile Masipa is expected to pass a new sentence for murder after hearing arguments from both prosecution and defence.

The hearing -- held in the same courtroom as the original trial -- is scheduled to last until Friday.

Pistorius faces a minimum 15-year jail term for murder, but his sentence could be reduced due to time already spent in prison and mitigating factors, including his disability.

He was released from jail last October to live under house arrest at his uncle's mansion in Pretoria after serving one year of his five-year sentence for culpable homicide.

Pistorius has shunned the media during years of intense coverage since Steenkamp's killing, but his family have revealed that he has given his first interview, due to air on British broadcaster ITV later this month.

Pistorius has always denied killing Steenkamp in a rage and, during his dramatic seven-month trial in 2014, vomited in the dock as details of his lover's death were examined in excruciating detail.

The year before he killed Steenkamp, Pistorius became the first double-amputee to race at Olympic level when he appeared at the London 2012 games.