African Leaders Must Do More To Save The Continent 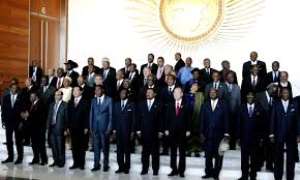 Africa face the greatest displacement of humanity, more people forced from their homes by war, misery or oppression from government.

As a results of this war or post war conflicts a large number of people from Africa including men, women and children have risked their lives on overcrowded boats in travelling through risky means to seek asylum in other countries. knocked on Europe’s front door. African leaders have failed to solve this issues confronting the continent.

The advent of intra-state conflicts or ‘new wars’ in Africa has brought many of its economies to the brink of collapse, creating humanitarian casualties and concerns.

These conflicts are often hinged on several factors including poverty, human rights violations, bad governance and corruption, ethnic marginalization and small arms proliferation. Although many actors including African union, ECOWAS, civil society and international community have been making efforts, conflicts continue to persist in Africa and their resolution is often protracted.

A more basic and long-term cause of conflict has been the catastrophic economic performance of many African countries. Coupled with the debt problem, poor flows of private capital into some African countries, and foreign aid programmes often inefficient, as Neil MacFarlane points out, economic discomfort can bail out into conflict. In 1992, UN Secretary General Boutros Boutros-Ghali stated as the deepest causes of conflict: ‘economic despair, social injustice, and political oppression.’

In the midst of poverty, African ruling classes, or the elite group who happen to hold power at a particular time, have enriched themselves and become the targets of envy or of rivalry by other elite groups. Politics is a commercial venture in his own right, as Roger Tangri puts it; conflicts arise not so much out of clashes of ideologies or programmes, but for profit – often for just an elite few, for the masses take little part in this part of conflict: nearly all tribal or ethnic conflicts are rooted in competition between individuals, for the scarce resources of wealth, state and power.

Communities will independence and self-determination when they consider that their value systems are no longer taken sufficiently into account by the society in which they have formed a part and the elites which rule it. Therefore, it is desirable that African leadership can and should rise and take up the challenge by working towards development for the benefit of all citizens of the continent. Politics of cultural plurality has sensitised that the more fairly a society is organised, the more the people tend to forget about the particularism that divide them.

Conversely, the more unfairly a society is organised, the more its citizens revive and cling to all manner of cleavages of deep segmentation and the more conflict arise. Africa should work towards getting out of the zone of turmoil, characterised by poverty, repression and war, in which it has existed all along, into zone of peace, in which can be found peaceful, democratic and wealthy nations.