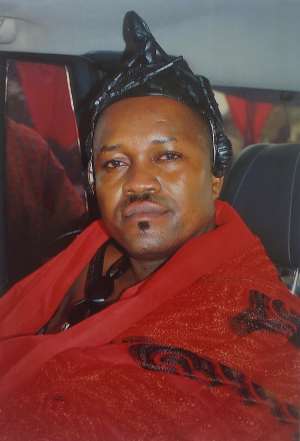 Angry Nii Adjetey Obuor-buor II, the Gbee-Owomli Mantse of Teshie, has appealed to President John Dramani Mahama to reverse all lands that were stolen by some of his party officials at the Animal Research Institute back to them.

Nii Adjetey Obuor buor alleged that Nii Otu Akueteh IX Katamanso Mantse and his Royal family led by their son and brother, Nii Laryea Afotey Agbo and the Anum Yemo family led by Hon. Dauda Yemo have sold and registered the Gbeeyeomlin village and lands at the Animal Research Institute near Adenta to cronies.

According to him, about 750 acres of land of the 850 acres government acquired land for the Animal Research Institute at Adenta have been stolen.

He added that the government has since refused to pay the royalties that were due them.

Speaking at a press conference, he added that the Regional Minister in sheer disdain of traditional laws and the rights of the Gbeeowo-omlin people, allegedly instooled a languard as a Chief and renamed the area New Katamanso.

Ever since, he said, the Regional Minister, who is the Chairman of the Regional Security, and his family together with some NDC gurus have been employing landguards and security men, not for the maintenance of order in the area but to aid him scramble and cease lands from them.

Nii Adjetey Obuor-buor added that their checks indicated that the immediate late elder brother of the Regional Minister, the late Asafoatse Apor and other brothers have built a massive structure on Gbeeowo-omlin land to serve as a supermarket.

He posited that they will fight with the last drop of their blood to get back their village and the cemetery which has been graded down by the brother of the Regional Minister, the late Asafoatse Apor.

According to him, the unused Commandos buildings that were built by former President Rawlings on the 165 acres of land in the 90s to house some security officers at Adenta Housing Down have been forcefully occupied by “armed robbers and prostitutes.”

He is asking the NDC government to return those buildings to them since they were not used for the intended purpose.

Nii Adjetey Obuor-buor II, appealed to President Mahama, the Speaker of Parliament, the Chief Justice, the Inspector General of Police and former President Jerry John Rawlings to call Nii Laryea Afotey Agbo to order for using his office to turn his family and village into a modern day acropolis.

He appealed to the government and authorities to probe into these disturbing matters to know who are selling their lands purported to be under an executive instrument before it ignite mayhem in the community.

According to him, he has fought and received several court judgments on land litigations for the past 25years after his great grandfather, Nii Adjetey Obuor Buor established the place since 1820.

He said they have all the relevant legal documents as the right owners of the 1646 acres of land which includes areas such as Lakeside, Animal Research Institute and Adenta housing down.

He expressed deep worry that his life is in danger as some people in government who are also occupants of the stolen lands, have made several phone calls threatening him with death.

Meanwhile, in an interview with an Accra based local radio station, Peace Fm, Hon. Afotey Agbo debunked those allegations indicating that “they don’t know what they are doing.”