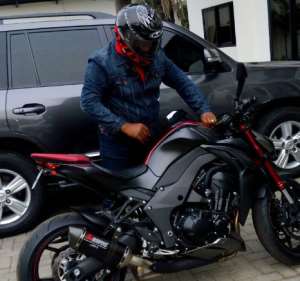 "Let them eat Brioche," Queen Marie Antoinette said when she was told that the peasants were suffering hunger. Brioche is a form of cake/bread enriched with eggs and butter that the elite had in Medieval France. She made that pronouncement in total disregard to the hungry people who were ravished by famine. Her husband King Louis XVI was busy indulging in excesses and debauchery to feel the pain of his subjects. In fact, a staff of sixteen servants participated in bathing him, the very few times he did so in a year.

The French people, finally, decided that enough was enough. Unlike tolerant Ghanaians, those people agitated and executed the Royal couple at the Guillotine. That is the shameful end of belligerent rulers who were unlucky to superintend over nations of uncompromising people.

In the same sense, we are being ruled by the likes of King Louis VXI (16th) and his wife marie Antoinette, in Ghana. President John Dramani Mahama seems to have gotten addicted to extreme luxury. I worried when I saw a video clip of the President exiting the huge concourse of Ibrahim Mahama's mansion at Airport Residential Area riding a Ducati motorcycle. This is a luxury speed bike that is worth over forty thousand US Dollars, the equivalent of GHs 160,000 (1.6 billion old cedis). As a biker, I can safely say that this bike is for smooth highways. It cannot be ridden on marshes, bog lands, or in floods. Besides, its hi-tech electronics cannot tolerate flooding or extreme weather. So the argument that he rode a bike to tour the carnage caused by the floods is a non-starter. Paradoxically, the 4x4s were what he was supposed to have used to achieve the purpose, but when GOD wants to expose somebody, wrong is written in almost everything that they do.

For the sake of propaganda to show the nation that he is a people's man, John Mahama made his biggest mistake by venturing out on this bike ostensibly to tour the flooded areas of Accra. Alas, he must have forgotten that Ghanaians have become all too discerning to fall for this gimmick. It was soon revealed that he rode the bike in the area of his brother's house just for the mischief that this move was intended for.

When people had lost everything they had as a result of floods that he could not resolve, he was out riding a very expensive luxury machines, enjoying himself at the expense of the tears of distraught Ghanaians. On the 10th of March, 2012, he signed a 795 million dollar loan to reconstruct the Accra drainage system after which he soon announced that flooding was going to be a thing of the past. Where did that money go? It is so obvious that it was not utilised for this purpose. We lost over 200 precious Ghanaian lives in the 2015 floods, do not forget!

The lazy Mayor, Okoe Vanderpuje, has only paid lip service to this perennial problem that has assumed catastrophic extremes. In countries where the authorities respected themselves, those at the helm of affairs would have resigned voluntarily for such epic failures as those of John Mahama and Okoe Vanderpuje. But no, not here in Ghana.

The cost of food has tripled in the past few years; the cost of household items has tripled too; electricity has become unaffordable, over twice the rent of average accommodation; fuel has sky-rocketed to hell; Doctors are unpaid; nurses are unemployed; youth are redundant; NHIA is in shambles; the economy is in a quagmire; suicide is on the rise due to harsh economic conditions; yet president John Mahama shamefully enjoys largess while Ghanaians are hungry, impoverished, devastated, and neglected. The annoying aspect of this insult is that NDC communicators hurry to bloviate in the media about how affable this most heartless president, John Mahama, is.

The obnoxious views of the unfashionable Sam George, Kofi Adams, Kokoon Anyidaho, Asiedu Ntetia et al, just do not make sense. They attribute to others what is characteristic of their NDC Party. In other words, they poop in their handkerchiefs, hurl their waste at others, as they pass on the blame of the stink that surrounds all, the good, the bad, and the ugly.

John Mahama's attempts to look good are as lame as a debilitated bird downed by a missed shot from the barrel of a disoriented hunter. His Ducati stunt was similarly as shameful as all other actions he had taken in bad faith to look good, albeit fruitlessly.