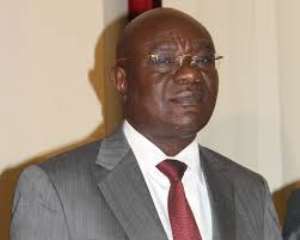 We continue with Part 2 of our essay on the Edward Doe-Adjaho-supervised "create, loot and share” scam. But first, here is an update on the Fair-Trade Oil Share Ghana (FTOS-Gh) Campaign/Petition.

UPDATE: FTOS-Gh) Campaign/Petition:
We understand that on 3 June, 2016, Mr. Edward Doe-Adjaho caused to be withdrawn from the Parliament of Ghana the 2014 version of the so-called Ghana Hybrid System oil contract bill. This is the scheme directly responsible for the loss of over $6 billion to Ghana during the last 5 years. According to our sources, they have replaced that bill with a "2016 version". There has been no public input or review. Needless to say, withdrawal of that shameful bill was one of the core demands of the Fair-Trade Oil Share Ghana (FTOS-Gh) Campaign/Petition. (More updates will be forthcoming).

Under the thumb of Mr. Edward Doe-Adjaho and the NDC administration that he is an integral part, Ghana has lost at least $1.2 billion each one of the last 5 years as Mr. Doe-Adjaho and his gang of NDC MPs, including Mr. K. T. "Hybrid" Hammond (NPP MP), have adamantly refused to adopt a fairer contract for Ghana's oil.

As of the beginning of this year total loses in oil revenues to Ghana is over $6 billion, and counting.

Need we point out that the $6 billion lost to Ghana is money Ghana did not receive because "Hon" Edward Doe-Adjaho has simply refused to do the right thing for Ghana even though the risks to oil companies have long dissipated, considerably. Further, GNPC itself continues to pay production and other costs not normally paid by sovereign owners of oil, under world standard Production Sharing Administration (PSA) contract system.

South Sudan has one of those for its oil!
And so, as a result, it is KOSMOS, Tullow, and the 33 oil companies the last time we counted, that have taken Ghana's lost $6 billion. It is they and Jon Benjamin's-DFID agency, having so greased the skids, it is they that are the biggest beneficiaries of Doe-Adjaho-supervised and benign "create, loot and share" scam. The grease is in part the $29 million DFID "Revenue Management" program. That "Revenue Management" Trojan horse is paying millions of dollars to ACEP, the Petroleum Commission, Ghanaian journalists and some media types so they will keep their African mouths shut about the massive theft of Ghana's oil revenues.

Doe-Adjaho and his gang are not inclined to ask for a Fair Share for Ghana's oil, and you know why, now!

This failure by Doe-Adjaho himself to "exercise proper supervision" is at a minimum an ethical violation.

But it is worse.
It is negligence and a sickening failure to exercise fiduciary responsibility reposed in Mr. Doe-Adjaho by all Ghanaians.

This failure constitute a scam.
It is a dangerous, illegal, expensive con game on the People of Ghana.

And so, we must inform Mr. "Busy-Body" Jon Benjamin and all British citizens that not only are there potentially serious violations of Ghanaian laws, there are in addition, potential violations of British law:

In fact, we recently discovered that NGO ACEP, and possibly other agencies, have recruited some Ghanaian students. They have enrolled them in what they now represent as Masters level "Oil and Gas" course. It sounds a lot more like the reported unaccredited d Trump "University" scam. A major principle (we call it PROPAGANDA) of NGO ACEP's "Oil and Gas" course is that while the PSA is worthwhile for South Sudan, the PSA is worthless for Ghana.

NGO ACEP still continues receiving UK-DFID funds for serving Oil Company interests and for keeping their mouths shut about adoption of the PSA for Ghana.

In all this Ghana oil money scam, Edward Doe-Adjaho and his committee(s) have done squat little to ensure Ghana receives a fairer share of its own oil revenues. Rather, they continue to bamboozle Ghanaians into focusing on that bright object, the "Revenue Management" Trojan Horse. They hid from Ghanaians the 2014 Ghana Hybrid Scam E&P law they wanted to enact, until the revelation the other day the bill has been withdrawn, and replaced with a 2016 version.

But, all reasonable minds will agree that Fair-Trade Oil Share ought to be an elementary prerequisite for any useful "Revenue Management" program for any country's oil, unless it is of the Trojan Horse kind, like UK-DFID's that does not ask if Ghana is receiving a fair share to begin with.

We will say here that even Rip Van Winkle, in his deepest slumber, understands that a true sovereign must first receive the sovereign's Fair Share of their own income from a contractor they hire, before the sovereign (Ghana) can reasonably better manage its own oil revenues.

The point is, you simply do not give up $6 billion to receive $29 million for your country, Hon Doe-Adjaho!

So, how's that 17% working for Ghana, Edward Doe-Adjaho?

In conclusion, what Mr. Edward Doe-Adjaho and his clique in Parliament, among them NPP hangers-on T. K. "Hybrid" Hammond, are doing is a whole lot worse than the Achimota-Ofankor Road scam.

Not that we are saying the Achimota-Ofankor Road scam is of no importance, that it does not deserve review. Surely, not!

In short, Edward Doe-Adjaho himself is presiding over a scam that is 27,413 times higher than the one he now condemns in public.

We are saying that a $6 billion dollar loss is a whole lot of money Ghanaians did not receive for development: to construct schools, hospitals, more and better roads, water plants, playgrounds, sustainable solar power plants independent of Chinese financing, etc.

THE VERDICT!
All rational minds can now deduce that based on the record, Chairman Edward Doe-Adjaho has actually been supervising the greatest financial loss to Ghana, the biggest financial scam, ever.

And the proof is in the loss - $6 billion-plus, as Edward Doe-Adjaho sits front-and-center in that massive “create loot and share” scam.

Edward Doe-Adjaho is the controller, the ring master, the organizer!

Wake up
Wake up from that Rip Van Winkle slumber, Hon Doe-Adjaho

Wake up
Wake up from that Rip Van Winkle slumber, Speaker
Speak
Do your job honestly and diligently for the People
Show Ghana that draft, sir
Enact the strongest Ghana-centered bill fairer and superior to 51%.

Tell them
Tell them you refuse to carry their water, again!
So it goes, Ghana!
SOURCES
Ghanaian Chronicle. Parliament Has To Wake Up From Its Rip Van Winkle State

Prof Lungu is Ghana-Centered/Ghana-Proud!
Subj: Hon Doe-Adjaho must wake up from his own Rip Van Winkle state (2)

Brought to you courtesy www.GhanaHero.com©10 June 16.