Accra Flooding; Till We Turn Waste Into Resource 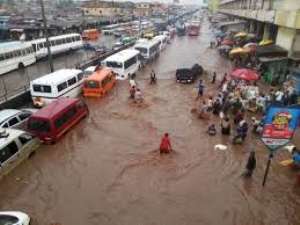 It happened in June 28, 2001. It was recorded as the worst in Accra since July 4, 1995, a heavy downpour submerged parts of Accra. Through several interventions such as construction of drains and demolishing exercises, many believed that was the end of the flooding in Accra but it rather sustained it till May 5, 2010. In June 22 of the same year, the nation recorded a death toll of 35 being the worst flood disaster in Ghana’s history. Report from NADMO indicated that as of October 14, 2010, over 161,000 people had been displaced by flood across the country due to torrential rains and the opening of the Bagre Dam in Burkina Faso.

Just two months into 2011, a heavy rain caused havoc in Accra destroying several properties. In November 1, 2011, a report indicated that 43,000 people displaced and 14 deaths recorded. Yet the incident of flooding in Accra never ceased. It happened again in May 31, 2013; June 4, 2014; June 6, 2014 and the worst happened June 3, 2015 claiming over 100 lives. Just some few days after commemoration of June 3 disaster, another flooding incident happened again. Who knows what is ahead of us in the years to come? Looking at our current attitudes and ways of thinking, we don’t need a prophet to prophesy that another flood is likely to happen in the years ahead.

Several reports have listed the following as the major cause of flooding in Accra; poor planning, poor drainage systems, improper disposal of refuse, urbanization, population growth, poor enforcement of laws on building construction, erosion and silting, choked gutters, poor sanitation, low and flat lands, damming of water bodies and so forth. Among these causes, addressing issues of improper disposal of waste and poor enforcement of laws on building would make significant impact in reducing the occurrence of floods in Accra.

Irrespective of the mechanisms we put in place to construct good drainage systems, improper disposal of waste due to poor enforcement of laws and attitudes will choke the drains leading to flooding. It does not matter the increase in population growth and urbanization at the major cities in Accra, a proper disposal of waste is likely to make a significant reduction in flooding in major cities.

Our focus on waste disposal and management in major cities would do this country much good than harm. Flooding is just a fraction of the effects of improper waste disposal and management in this country. Other negative impacts include; increase outbreaks of preventable diseases, reducing aesthetic value of the environment, increase in water, land and air pollution, affecting health of beneficial living organisms, increase in global warming and so forth. Till we find ways and means to address indiscriminate disposal of waste, flooding and other disasters such as cholera outbreak will keep hitting hard on this country.

One way of addressing the issue of indiscriminate dumping is to turn waste into resources. We need to find ways of attaching economic values to waste. In most advance countries, wastes are not just waste, they are money, they are resources and of huge value. Currently, it is common to see people picking up used sachet water bags on the street to make economic gains out of it. With government intervention and research, this can create huge employment and reduce disposal of sachet water bags which predominate largely in our waste stream.

Every valuable resource today was in sometime past ascribed as waste. Through research, they have been redefined into useful products. I guess today, our forefathers would not have exchanged gold dust for gun power. Several countries are recycling waste such as fecal matter into useful soil amendment products while ours are disposed into open drainages, increasing turbidity in rivers which subsequently affect the flow rate and carrying capacity of water in drainages which are contributing factors to flooding. Fecal matter unfit for agricultural purposes are used in some countries for landscaping purposes reducing erosion and washing of soil into river basin which have high tendency to increase silt in drainages leading to flooding. A proper sewage treatment plant can produce enough soil amendment which can be used for landscaping and beautification purposes reducing the impact of erosion. Food and organic waste which predominate largely in our waste stream can be composted into product to enhance soil quality and food production in the country.

The government through several interventions should ensure that manufacturers produce measure to ensure the collection and treatment of their products after being used and discarded. Much research should be made into waste products in turning them into useful resources. This will reduce the unemployment rate in the country. I believe that government spending on waste recovery, recycling and reused business will do this country much good than the Komenda Sugar Factory. The best way we can change our attitude toward indiscriminate disposal is to attach an economic value to waste and this is something that can be done. The story and event still continues, till we value waste, till we attach economic values to waste, till we see waste as resources, no amount of intervention can be done to avoid indiscriminate dumping into our drainage systems which is a major trigger to incessant flooding in this country.