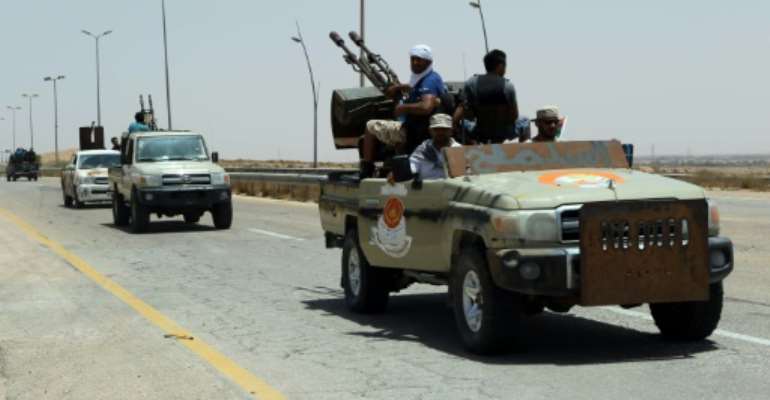 Forces loyal to Libya's UN-backed unity government patrol the entrance of Sirte as they advance to recapture the city from the Islamic State (IS) group on June 10, 2016. By Mahmud Turkia (AFP/File)

The pro-government forces entered Sirte on Wednesday and have been advancing more quickly than expected against IS, which seized control of the coastal city last year and turned it into its main base of operations in North Africa.

The loss of Sirte would be a major setback for IS, which has also been losing territory in Syria and Iraq where the jihadist group established its self-declared "caliphate" in 2014.

Jihadist forces -- surrounded in a densely populated area of around five square kilometres (two square miles) in the city centre -- have been putting up fierce resistance and on Sunday carried out three suicide car bombings against pro-government fighters.

Two of the bombers hit gatherings of pro-government forces and another hit a field hospital, he said.

At least one person was killed and four wounded in the blasts, Issa said.

The attacks came a day after pro-government forces said they had recaptured the port in Sirte, the hometown of Libya's ousted dictator Moamer Kadhafi, and residential areas in the city's east.

The forces are allied with Libya's Government of National Accord, which is backed by the international community as the country's legitimate authority.

The GNA, led by prime minister-designate Fayez al-Sarraj, has been struggling for months to assert its authority in the face of rival administrations vying for power in the chaos of post-Kadhafi Libya.

The pro-GNA forces are mostly made up of militias from western cities, notably Misrata, and the guards of oil installations that IS has repeatedly tried to seize.

They have engaged in heavy street-to-street battles with the jihadists, deploying tanks, rocket launchers and artillery in the fight for the city.

The Misrata militia forces -- who have an arsenal that includes MiG fighter jets and attack helicopters -- have also carried out dozens of air raids against IS.

The operation announced Sunday on its Facebook page that it had launched fresh air strikes against IS positions and vehicles in central Sirte.

Much of the fighting has been around a sprawling Kadhafi-era conference centre which once hosted international summits but now houses an IS command centre.

IS has responded to the offensive with machineguns, mortar rounds and sniper fire, as well as bombings like Sunday's suicide attacks.

A medical official in Misrata said on Saturday that at least 137 pro-GNA fighters had been killed and 500 wounded since the operation began with a sweep towards Sirte on May 12.

Foreign intelligence services estimate IS has 5,000 fighters in the country, but its strength inside Sirte is unclear.

The establishment of an IS bastion in northern Libya, just across the Mediterranean from Europe, raised widespread fears and foreign powers backing the GNA have welcomed the offensive on Sirte.

The UN envoy to Libya, Martin Kobler, said Saturday on Twitter that he was "impressed" by the "rapid progress" of pro-GNA forces.

He also urged "all fighters to respect international humanitarian law," saying "civilians must not be targeted".

Most Sirte residents have fled but officials have said some 30,000 civilians remain in the city.

Washington's anti-IS envoy Brett McGurk also said Friday he was "encouraged by the progress" being made in Sirte, adding there was a good chance IS forces in the city "could crack pretty quickly".

The United States and Britain are reported to be providing intelligence support to the operation, with the Washington Post reporting earlier this month that a small group of US special forces had been sent to Libya to work with the militias.

Pro-GNA forces said on Thursday they expected within "two or three days" to announce the liberation of the city.

Analysts have warned that retaking Sirte would not spell the end of IS in Libya, where the jihadists have fed on political and military divisions since the 2011 uprising that ousted and killed Kadhafi.