The IS in Libya: key dates 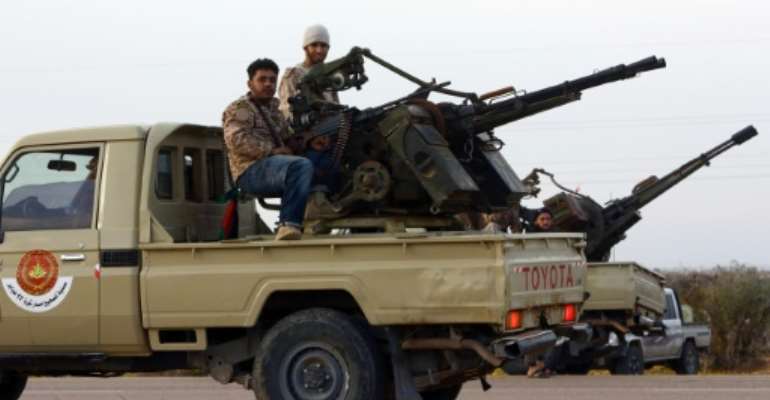 Members of a brigade loyal to Libya Dawn, an alliance of Islamist-backed militias, sit on a pick up truck mounted with a machine gun on March 15, 2015 in Libya's coastal city of Sirte. By Mahmud Turkia (AFP/File)

Tripoli (AFP) - Key dates since the Islamic State group (IS) moved into Libya in 2014 amid the chaos that followed the ouster of Moamer Kadhafi in 2011.

On Monday, US warplanes carried out their first air strikes on positions in the IS bastion of Sirte.

- November 19, 2014: The US says it is "concerned" by reports that radical extremists with avowed ties to IS are destabilising eastern Libya, having already seized vast swathes of territory in Iraq and Syria.

- December 27, 2014: A car bomb claimed by IS explodes outside the diplomatic security building in Tripoli without causing casualties.

Since then IS has carried out multiple suicide attacks, including in February 2015 in Al-Qoba, near the eastern town of Derna, that killed 44 people and in January 2016 at a police school in Zliten, east of Tripoli, which killed more than 50.

IS videos of killings

- February 15, 2015: IS releases a video showing the beheading of 21 Coptic Christians, all but one Egyptian, that it says was filmed in January. Egypt carries out air strikes on IS in its then stronghold of Derna.

- April 19, 2015: A new video shows the execution-style killing of 28 Christians originally from Ethiopia.

- June 9, 2015: IS announces it has captured Sirte, hometown of Kadhafi, east of Tripoli.

- July 12, 2015: The group acknowledges it has been pushed out of Derna after weeks of fierce fighting with the town's Mujahedeen Council.

- November 13, 2015: The US bombs IS leaders in Libya for the first time and says it killed Abu Nabil, an Iraqi also known as Wissam Najm Abd Zayd al-Zubaydi. Libyan officials identify him as the IS chief in Derna.

- February 19, 2016: A US air strike on a jihadist training camp near Sabratha, west of Tripoli, kills about 50 people.

- February 24, 2016: Some 200 jihadists briefly occupy central Sabratha, before being ousted by militias.

- March 30, 2016: The head of Libya's UN-backed unity government, Fayez al-Sarraj, arrives in Tripoli, despite the hostility of rival authorities.

- May 12, 2016: A vast offensive begins by forces loyal to the unity government to retake Sirte.

- June 4, 2016: Unity government forces say they have retaken a jihadist air base south of Sirte.

- June 9, 2016: Government forces enter the centre of Sirte and besiege the jihadists.

- July 23, 2016: Loyalist forces say they have seized a building used by the IS to manufacture explosives.

- August 1, 2016: Sarraj says the US has carried out air strikes on IS positions in Sirte for the first time, at the unity government's request.

A US senior administration official says American troops will not take part in any ground operations in support of the government.