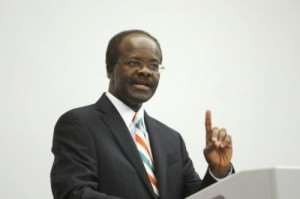 " Our attention has been drawn to comments made by the Dr Papa Kwesi Nduom, founder and leader of Progressive People's Party (PPP) when addressing some students at UCC last week on the New Komenda Sugar Factory which he sarcastically questioned the whereabouts of the raw materials since to him, there was no sugarcane plantations owned by the Factory"

But the Central Regional Communication Officer of the ruling National Democratic Congress (NDC), Mr. Kwesi Dawood has challenged Dr. Paa Kwesi Ndoum to return factory's land he has encroached upon to be used to produce raw materials to feed the sugar factory.

Addressing staff of Shesheeshew company Limited at Agona Swedru, Mr. Kwesi Dawood angrily asked "How can the Komenda Sugar Factory company which is 100% owned by the Government of Ghana commence the cultivation of its own sugarcane when the likes of Dr Paa Kwesi Nduom have encroached on the Factory's Lands meant for plantations? Yes! More than half of the land the 2012 PPP flagbearer is being developed for Ndoum University is Government acquired land for the Komenda Sugar Factory of which the old Factory built by Osagyefo Dr Kwame Nkrumah cultivated sugarcane on that very land to feed the factory. I state on authority that because that plot is for the Sugar Factory, Dr Ndoum's application to the lands Commission for regularisation of the aquisition of that land was halted and same had been communicated to him long ago. Many progressive citizens are surprised that he is still developing some structures on the land in question when the Lands Commission has already informed him of their inability to process his application for regularisation? If the PPP founder who has been talking about corruption and respect for institutions is noted for this, will you be surprised when he chastises Government for not starting a sugarcane plantation for the factory before it's commissioning when the same person has acquired a large tract of the land meant for the plantations?"

The Communication Office continued "There wouldn't have been the need to respond to this retrograde statement from him because the good people of Central Region and KEEA particularly, were not expecting that pessimistic behavior from him especially since he claims to have the well being of our people at heart and it angers some to the core especially when he as a Former Minister of the NPP government of 2001-2008 and an MP of that area for a term of office couldn't fulfill his promise of revamping the factory? What happened to the many sugarcane farmers at Anyinase and Nsadwer who he tasked to grow sugarcane? What was his response when the NPP government refused a direct request from Nananom of the area to reactivate the factory?

Under the Visionary leadership of President John Mahama, The New Komenda Sugar Factory has commenced operations now relying on outgrowers and sugarcane farmers from 100km radius of the factory's premises to supply sugarcane aside the factory's own plantations which will commence soon.

Meanwhile, out growers in and around KEEA have began serious business as management of the factory has contracted them to supply their produce as more and more people are cultivating the sugarcane because of its ready market and better pricing. A tonne of the sugarcane bought at the factory is now 80cedis as against the 45cedis offered by akpeteshie distillers"

On the claim by the Minority Spokesperson on Trade and Industry that sought to suggest that there was no need for the FACTORY to have been revamped because it is located in a coastal community, Mr Kwesi Dawood thanked him for that information and responded that he will bring it to the notice of coastal dwellers whiles maintaining that the new Komenda Sugar Factory is farther away from the sea than the one built by Osagyefo Dr Kwame Nkrumah.

"The factory is going to contribute its quota in restructuring the economy, reduce the Nation's expenditure on Sugar importation, create employment for our teeming unemployed citizens (skilled and unskilled ;direct and indirect) , significantly reduce rural-urban migration, gives meaning to adding value to our raw materials which is vital for our industrial boom and will go a long way to reduce pressure on foreign exchange resulting from imports, assist university students in their research or industrial attachments; among other benefits which makes the factory very dear to hearts of Nananom and people of Ghana so any attempt to run it down, pooh-pooh it etc under the disguised of criticism especially from persons who did not wish to see it functioning again will attract our wrath', he added.

You’ve Fulfilled Most Of Your Manifesto Promises; Objective ...
2 minutes ago

How Slain Mfantseman MP Begged Killers To Follow Him Home Fo...
17 minutes ago