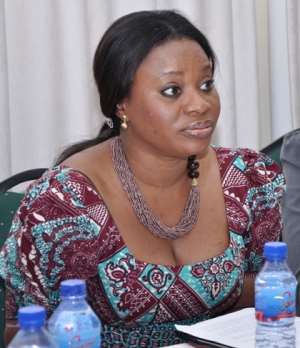 Nana Akuffo Addo and his supporters have never accepted the results of the 2012 elections which saw him being declared the loser by an estimated 300,000 votes by the Electoral Commission. They have since that event looked for extraneous excuses for Nana Akuffo Addo’s defeat at the polls and in the process blamed all manner of factors and outfits for the loss especially the Electoral Commission.

Since the loss, they have demonized the Electoral Commission and taken Ghana on a wild goose chase of the election petition case at the Supreme Court primarily to destabilize President Mahama’s government and to create an excuse for Akuffo Addo to contest again for the Presidency. After going through all the theatricals and drama of pink sheets, the Supreme Court failed to see the merit in Akuffo Addo’s petition and confirmed John Mahama as the true victor of the elections.

In the process, the Supreme Court did not doubt the integrity of the Electoral Commission, despite recommending some reforms in Ghana’s electoral processes for implementation by the Commission. Ironically, the voters register was not cited by Akuffo Addo at the Supreme Court as the primary cause of his defeat in election 2012. Rather the reasons cited by Akuffo Addo in his petition related mainly to issues such as lack of signatures on pink sheets, and other reasons which the court did not accept as justifying the cancellation of millions of validly cast votes in the elections.

After needlessly taking Ghanaians on an eight month election petition expedition - which was seriously exposed by the Supreme Court of Ghana as incompetent - one would have thought that Akuffo Addo and his supporters would give the Electoral Commission its due respect for successfully implementing Ghana’s first biometric elections. Instead, they continue to blame extraneous reasons for their loss, and have sought to rather attack the integrity of the Electoral Commission at the least opportunity.

In this regard Dr. Bawumia in a typical grandstanding style brought the blame game strategy of Akuffo Addo to a new level by falsely claiming that the Voters Register was seriously flawed. His main reasons were that the Voters Register was filled with foreign nationals largely Togolese nationals, and as such needed to be replaced with a new one. When he was taken to task for recklessly attacking the records of the Electoral Commission, he managed to only produce 10% of documents that he sought to rely on which were found to be fabricated and unreliable as a basis for rejecting Ghana’s Voters Register.

Not satisfied with yet another failed mission to attack the integrity of the Electoral Commission’s records, Akuffo Addo and his affiliates instigated and supported court cases that attacked the integrity of the Voters Register by claiming that it contained voters who had been registered using National Health Identification System (NHIS) cards, which they claimed were on the register unlawfully and needed to be validated before the 2016 elections. In effect the blame game of Akuffo Addo and his affiliates which had been an ongoing strategy since the 2012 elections, continued unabated despite clear evidence to the contrary that Akuffo Addo genuinely lost the 2012 elections - a loss which was not due to any serious misdeeds at the Electoral Commission or due to a manipulation of its records such as the voters register.

Thus instead of looking in the right direction for the factors that caused Akuffo Addo’s defeat at the polls, Akuffo Addo and his supporters have deliberately resorted to blaming the wrong reasons for his loss. The real reasons for his loss have thus been ignored even though they still continue to feature prominently as factors that would spell his doom in election 2016.

These reasons primarily relate to his personality and his unappealing brand of politiking which has resulted in him polarizing the NPP front to his own detriment. His penchant for preaching doom for Ghana and reckless attacks on institutions of state leading to the creation of unecessary political tension in Ghana is also a factor that has emboldened the broad majority of Ghanaians to view him as incapable of guaranteeing the peace of Ghana even if given a chance at the presidency. His vindictive brand of politicking which has seen him endorse physical attacks on his perceived opponents in even the NPP present him as intolerant and an affront to cherished democratic freedoms of Ghanaians.

Besides, his unpatriotic posturing which frequently leads him to run his campaign like a campaign for the Presidency of Ivory Coast - with him regularly praising Ivory Coast over Ghana - is also unappealing to Ghanaians. Indeed available data including UN Human Development indexes rather place Ghana much above Ivory Coast in economic development and quality of life indices, and exposes him as lacking in depth knowledge about the country that he seeks to be made president off. His lack of clear cut alternative policy programmes to what President Mahama is implementing is also one of the reasons which caused his defeat in 2012 and the same existing factor clearly points to him loosing in 2016.

The Electoral Commission and other extraneous factors have thus been unfairly blamed by Akuffo Addo for his electoral misfortunes, when the real reasons for his misfortunes are not extraneous. They are within him and the political style and mentality with which he has fought his electoral campaigns.His dictatorial tendencies and penchant for intolerance of dissent and a lack of managerial qualities as required for the high office of the Presidency, is what will ensure that he fails again. Therefore when he is defeated in election 2016, let him and his affiliates not look for extraneous causes for his defeat. He has already laid the foundation for his certain defeat in election 2016. He should spare Ghanaians undue political tension before and after his impending loss in 2016 if he truly loves Ghana.

The reason for his impending loss would therefore certainly not be due to the Electoral Commission’s Voters Register, since under the biometric electoral system currently being operated in Ghana the Voter Register is not the key determinant of who wins an election in Ghana. It is the electorate and each candidate’s appeal and impact on them in general that is the key. The impact relates largely to opinions that are formed about the candidates over a period. For the incumbent, the opinions relate to his conduct and performance in his current term.

For the minority candidates, the opinions relate to perceptions about their conduct, character and their demonstrated ability to solve problems confronting the people through alternative policy solutions that they present to the electorate. The Voters Register bloated or not per se does not guarantee victory for any candidate in any election. In any event what shows that NHIS card holders who are on the Voters Register are sympathizers of this party or the other?