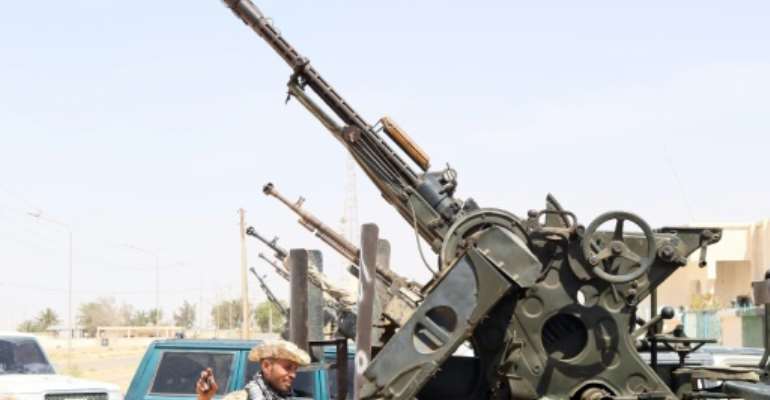 Libya's unity government has been trying to unify violence-ridden Libya and exert its control over the entire North African country. By Mahmud Turkia (AFP/File)

The appeal came as the 15-member council was considering a draft resolution that would allow Operation Sophia to intercept vessels suspected of transporting weapons to Libya.

"We ask this council to adopt a resolution on authorizing Operation Sophia to enforce the UN arms embargo on the high seas off the coast of Libya," Mogherini told the council.

Operation Sophia's enforcement of the arms embargo would help shore up the UN-backed national unity government by cutting off the flow of weapons to the various militias.

Established in Tripoli more than two months ago, Libya's unity government has been trying to unify violence-ridden Libya and exert its control over the entire North African country.

An arms embargo imposed on Libya in 2011 during the uprising against Moamer Kadhafi remains in force.

The draft resolution prepared by France, Britain and other European powers would build on a previous measure that gave the EU naval force UN backing for its mission to combat migrant-smuggling.

Addressing the council, Mogherini expressed hope that council members would "once again do the right thing and make the Mediterranean a safer place, starting for our Libyan friends."

The draft measure was expected to run into some resistance from Russia and Egypt, which views the new unity government as fragile and in need of more political legitimacy.

Russian Ambassador Vitaly Churkin said Moscow is not opposed to expanding the mandate of the EU naval operation, but added that he was concerned about the response from various Libyan sides.

"We are not opposed to it but we need to be very careful about it," Churkin told reporters.

"Our concerns is that everything must be done in a way that does not create any suspicion against any party."

"The greatest priority should be to make every effort in order to finalize the creation of proper authorities in Libya," said Churkin.

International powers have said they would be willing to consider an exemption to the arms embargo to allow the new government of Prime Minister Fayez al-Sarraj to purchase weapons.

That request, however, is expected to take some time after the Security Council sought assurances from the Tripoli government that the weapons deliveries will not fall into the wrong hands.

The council has asked the new government to provide assurances of secure storage of the weapons and to clarify the chain of command of the various militias backing it.

The European Union has launched a program to train the Libyan coastguard and navy to bolster security on the coast and in Libya's territorial waters.