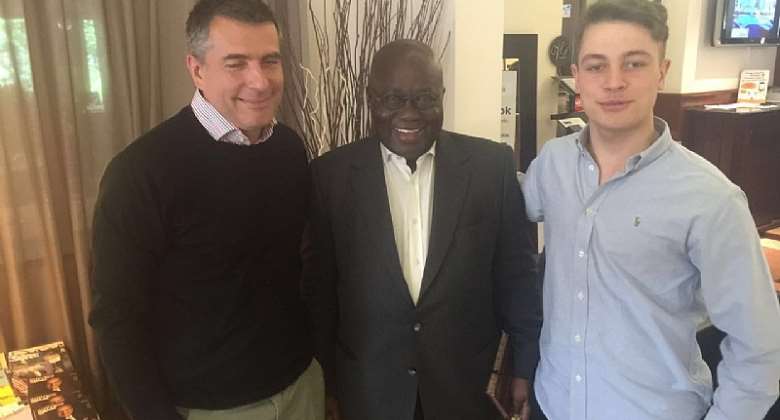 Popular video-blogger, Kofi Filippo, is calling on Ghanaian politicians to use their influence to ensure that the upcoming 2016 general elections becomes peaceful and incident-free.

Kofi Filippo and his father, Valter Sansalone, met the leader of Ghana's largest opposition political party, Nana Akufo-Addo, at the CDH Hotel Villa Ducale, on Saturday prior to a fundraising event for the politician in Modena.

Speaking to hypingghana.com , Filippo said his brief encounter with Nana Addo and his entourage entourage gave him the opportunity to learn more about the arts in Ghana as well as the NPP leader's commitment to give the local entertainment industry a boost if voted to become president.

"I was excited to receive an invitation from such an important personality. Nana was down to earth, and he even invited me to visit him at his residence during my next visit to Ghana," he added.

ABOUT KOFI FILIPPO
Filippo Sansalone (born August 7,1998, in Venice, Italy) is a cultural ambassador, actor, singer/dancer. Popularly known as Kofi Filippo, his relationship with Ghana began in 2012, when he showed interest in learning the Asante Twi language from a Ghanaian elementary schoolmate. Over the years, he has earned recognition from the Ghanaian community and industry players, which has made him a prominent promoter of Ghanaian music in Italy, and globally, through social media.

Kofi Filippo Drama Troupe, which he formed in December 2015 together with his longtime pal, Wesley Aibi, performs mainly at Ghanaian events in Italy. On the occasion of Ghana's 59th Independence Day Anniversary, Kofi and his group performed the forty-minute play, 'Kofi Filippo Wɔ Kurom' at Copenhagen, to members of the Association of Ghanaians In Denmark.

He has a close relationship with Ghanaian-born Italian footballer, Mario Balotelli, as well as the Ghanaian ambassador to Italy, Mrs. Molly Anim Addo, who acknowledges him as an an agent in promoting friendship between the two nations.

Sansalone, whose only visit to Ghana was during the summer break of 2015 where he recorded and released his first single, 'Italy Abranteɛ,' is currently studying Languages at Liceo Linguistico Veronica Gambara in Brescia. He plans to use his second visit to Ghana to embark on humanitarian projects across the country. He is scheduled to join the Public Health Unit of the Ghana Health Service in the Western Region to embark on a sensitization campaign at malaria-endemic communities in the region in July, 2016.