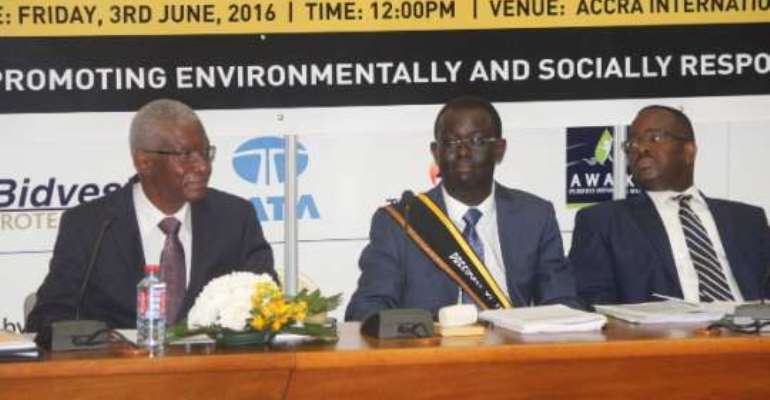 Accra, June 4, GNA - The Ghana Chamber of Mines says mineral revenue of producing members fell nearly 14 per cent to $ 3.39 billion in 2015 down from $3.94 billion the previous year.

The drop in the mineral revenue is due to reduce production and the lower gold price as well as decline in shipments of manganese.

The Chamber's President, Mr Kwame Addo-Kufuor told the 88th Annual General Meeting of members that while manganese shipments recorded a dip of five per cent, the volume of gold exports also reduced by 10 per cent.

'2015 was quite a difficult one for the mining industry in many respects, while the economy experienced power crisis, mining companies had to manage falling commodity prices with increase in operational costs,' he said.

On the outlook for the minerals sector in 2016, Mr Addo-Kufuor said the Chamber expected the gold price to remain under pressure for most part of 2016 as the US Federal Reserve Bank eases its quantitative monetary programme.

This, he said, is likely to lead to a rise in interest rates of near money assets and a shift in investors' portfolio away from gold.

He said the expected reduction in global gold output could moderate the impact of the US policy.

The Minister of Lands and Natural Resources Nii Osah Mills commended the mining sector's contribution to the economy over the years, especially in the area of job creation and support for government's national development agenda and sustainability programmes.

He encouraged the mining companies to invest in the exploitation of the other mineral resources, including iron ore, solar salt and silica and granite.

Nii Mills said to encourage more exploration and exploitation of minerals, airborne geophysical survey and geological mapping have been conducted in various parts of the country.

He urged prospective investors to take advantage of the information to carry out further exploration.

The AGM was held on the theme: 'Sustaining Mining and Power Investments: Meeting Stakeholder expectations in a challenging global environment.'