Over 100 migrant bodies washed up in Libya

By Catherine Boitard, with Rim Bishti in Tripoli 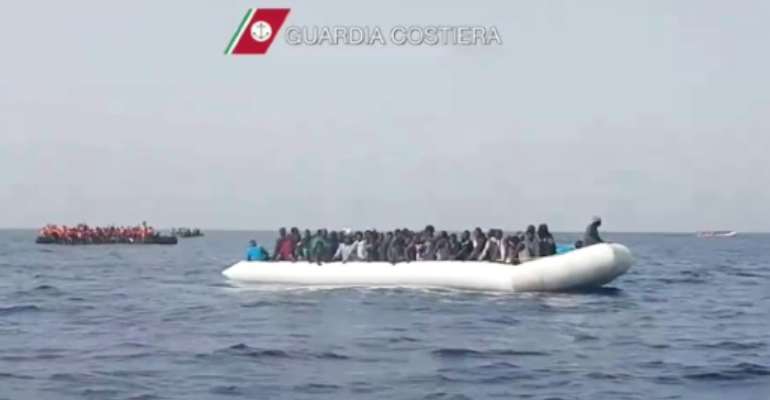 A picture released by Italian Coast Guards shows a rescue operation in May of a boat carrying migrants off the coast of Sicily. By Str (AFP/File)

Athens (AFP) - The bodies of more than 100 migrants have washed up on a Libyan beach as a new migrant boat tragedy unfolded in the Mediterranean south of Greece on Friday.

Desperate rescue efforts were under way off the Greek island of Crete where at least 340 people were saved after a vessel believed to have left Africa with hundreds of migrants on board capsized.

The Libyan navy said meanwhile it had found the bodies of at least 104 migrants on the shore in the western Libyan town of Zwara, warning that the toll could rise.

"The number of bodies retrieved Thursday evening was 104 but the toll is expected to rise since an average boat carries 115-125 passengers," said Libyan navy spokesman Colonel Ayoub Qassem.

The names and nationalities of the drowned migrants, whose bodies were found on Thursday, were not yet known.

In Greece, efforts were under way to find hundreds believed missing after a migrant boat capsized off the island of Crete.

Coastguard spokesman Nikos Lagadianos said at least 340 people had been rescued, and the International Organization for Migration (IOM) said the vessel "is believed to have left Africa with at least 700 migrants on board".

Among the survivors, over 240 are on route to Italy, 75 to Egypt, 16 to Turkey and seven to Malta, the coastguard said.

The Friday sinking marked the second migrant vessel found in that area of the southern Aegean Sea since last week, indicating that people smugglers may be forging a new route to avoid NATO ships.

A Greek coastguard spokeswoman told AFP a major rescue operation was underway, including four ships that were passing through the area, in clear but windy conditions about 75 nautical miles south of Crete.

"The number of people in distress could be counted in the hundreds," she said.

It was not immediately clear where exactly the boat had left from or where it was headed, or the nationalities of those on board.

The coastguard spokeswoman said a passing ship spotted the sinking vessel off Crete.

The coastguard rushed two patrol boats, a plane and a helicopter to the scene.

About half of the 25-metre-long boat was completely underwater, the spokeswoman said.

The deaths are the first in Greek waters since April, as a controversial March deal between the EU and Turkey designed to halt the flow of migrants using the popular Aegean route has led to a sharp drop in arrivals.

Nevertheless, some 204,000 migrants and refugees have crossed the Mediterranean to Europe since January, the United Nations refugee agency said on Tuesday.

More than 2,500 people have died trying to make the perilous journey this year -- the vast majority of them on crossings between Libya and Italy -- as Europe battles its worst migration crisis since World War II.

The most recent deadly incident in the Aegean dates back to early April when four women and a child drowned off the island of Samos.

Greek tourist islands in the Aegean witnessed the arrival of hundreds of thousands of people crossing in flimsy boats from nearby Turkey last year, many of them refugees fleeing the war in Syria.

But the number of people using that route has reduced to a trickle after the EU-Turkey deal, under which migrants landing on the islands can be sent back to Turkey, as well as the deployment of NATO ships in the Aegean.

The IOM said its observations supported the theory of a possible new migrant route, reporting a "surge of new arrivals to Greece further south, on sea lanes connecting North Africa to the island of Crete."

On May 27, the Greek coastguard intercepted a boat off Crete carrying 65 Syrians, Afghans and Pakistanis, under the control of two suspected people traffickers -- a Ukrainian and an Egyptian.

The coastguard did not indicate if that boat, which the migrants said had left from Turkey, was heading for Italy or whether the smugglers had chosen the route through the southern Aegean to reach Greece by avoiding NATO ships deployed further north and east.

The NATO deployment is aimed at cutting off the Aegean route previously used by hundreds of thousands of people fleeing poverty and conflict in Asia, the Middle East and Africa.