Wontumi Must Apologize To IGP 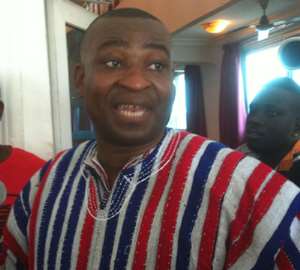 The Ashanti Regional Chairman for The New Patriotic Party (NPP) Benard Antwi- Bosiako, popularly called Chairman Wontumi has seven days to retract and apologize to the IGP or face the wrath of the Young Cadres Association of the National Democratic Congress (NDC).

The leadership of the Young Cadres Association (YCA) at a press conference said, Chairman Wontumi has once again threatened the Security of this country and called the bluff of the Police and anyone who attempts to accost him.

He, (Wontumi) has said categorically that COP John Kudalor, the Inspector General of the Ghana Police Service is corrupt and because of this, he has no moral right to attempt to arrest him in the event that he, Wontumi, does anything contrary to the laws of this country.

He further threatened to lead a pack of bloodthirsty hounds to attack NDC party agents during November Polls. Comments made on Okay FM, an Accra-based radio Station.

According to the YCA, the unity of a country, the wellbeing of its people, the confidence of people, especially foreigners, to visit and invest in that country all hinge on security, law and order. It is thus disheartening, totally repugnant, and outrageous when one hears and reads of attempts by some people of undermine the security of the state.

Therefore, the YCA has given Wontumi the benefit of the doubt to retract and fully apologize to the IGP, the Police Council headed by His Excellency Vice President Amissah Arthur, the President, His Excellency John Dramani Mahama who anointed the IGP.

They said, their conviction to grant Wontumi the laxity to apologize stems from the fact that, in his usual reckless manner, he might have might have spoken without recourse to good reasoning and thus on the hindsight, he might see the danger attached to his speech.

Failure to do this, he should be prepared to meet to meet the YCA in court to prove the corruption allegations leveled against the IGP. It is their strong belief that a weakened and corrupt Police institution cannot preserve the security of our dear nation, let alone, guarantee the sanctity of our burgeoning democracy. They also call on the IGP to, as a matter of urgency, cause the arrest of Wontumi if he fails to retract and apologize or prove the veracity of his statement.

They further on said, for the second part of Wontumi’s statement of leading a pack of hoodlums to attack and beat up NDC Party agents at the polling stations, he can only do this in his dreams and they are prepared for him and will meet him squarely if he has the guts to start such a thing.

They said for them, one thing clear from Wontumi’s distasteful comments, forms part of the NPP’s broader agenda to undermine the authority of the state.

They emphasized that, Nana Akufo Addo and his bunch of nation-wreckers should not rejoice yet. President Mahama has fully resourced the security agencies and the nation has a formidable security apparatus to deal with any miscreant who threatens the peace of this country.

They then said, in the interest of peace and harmony, they entreat Nana Akufo Addo to call his hawkish elements within his party to order, they do not believe democracy is how to ‘Undermine the pillars of power.’ If Akufo Addo has high hopes about his chances of winning power in the upcoming elections, he should play by the rules of the game.

They concluded that, the good people of Ghana are the final arbiters in November, 2016 and they know that in the end, not the loud or the violent will prevail, but those with good reason and gratitude.

The silent majority of Ghanaians have had their lives impacted by the good works or president Mahama and his government and we know that they will reward him with a second term to complete his good works.