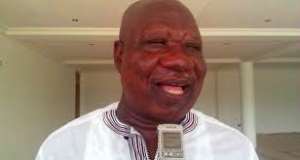 The central regional communication directorate of the NDC says the assertion that their indefatigable chairman, Mr. Bernard Allotey Jacobs has been busted in the UK for money laundering and drug related issues, was orchestrated by the NPP to bring the name of the chairman into disrepute.

They said, the rumour of Mr. Allotey’s arrest was allegedly ignited by Mr. Hopeson Adorye of the NPP purposely to malign and destroy the persona of their chairman who is very famous in the region.

Addressing a press conference in Cape Coast on Thursday, the regional communication officer of the party, Mr. Kwesi Dawood stated that the region has become a no go area for the opposition NPP due to the hard work of Mr. Allotey Jacobs.

He alleged that the NPP was desperate, frustrated and dazed with the kinds of development and creation of job opportunities currently ongoing in the region under the chairmanship of Mr. Jacobs.

“He has made the NPP redundant in the region. Obviously, the only thing they can do which they know best to do was to engage in smear campaign”. He added.

According to Mr. Dawood, chairman Bernard Allotey Jacobs had proven that his understanding of politics is far beyond the imagination of the NPP hence their attempt to bring him down at all costs.

He emphasised that Mr. Allotey Jacobs remains a pillar in the NDC's quest to clinch 20 or more parliamentary seats in the region saying “no amount of spurious and unintelligent allegations against his persona or party can dissuade him from achieving this feat”.

He asserted, “we want to assure them that we are FOCUSED on winning Election 2016 through hard work. We are ever-ready to support our Regional Chairman to achieve those set objectives in style”.

News about Mr. Allotey Jacobs’arrest in the United Kingdom on alleged money laundering and cocaine related offences went viral on social and other main stream media in the early hours of Sunday, May 29th.2016.

According to the NDC, this monstrous and mortifying rumour was allegedly posted by Mr. Hopeson Adorye, an activist of the NPP on his facebook wall the same day.

In a statement, the British High Commissioner to Ghana, H.E. Jon Benjamin denied the reports in a series of tweets on Sunday followed by a full statement from the High Commission the next day.

The statement categorically refuted the allegation that Mr. Bernard Allotey Jocobs, the influential central regional chairman of the NDC had been arrested by UK officials.

This statement supposedly triggered the anger of Mr. Maxwell Kofi Juma, former Mayor of Kumasi and former NPP Member of Parliament for Asokwa in the Ashanti region.

The former mayor of the garden city gave vent to one of his typical emotional outburst while speaking on phone with Accra based Neat Fm and used the “F” word for the respected high commissioner.

Mr. Juma could not fathom why the High Commissioner categorically stated that Mr. Allotey was never arrested at the Heathrow Airport by UK law enforcement authorities.