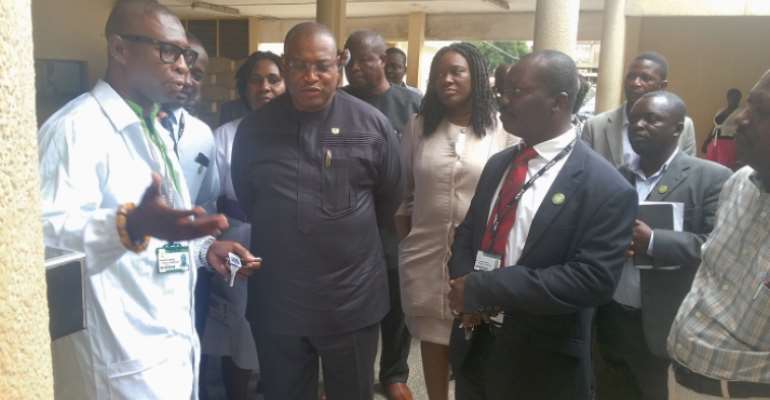 The government has advanced plans to engage retired midwives to make up for the shortfall of that category of health professionals in the public sector, the Minister of Health, Mr Alex Segbefia, has announced.

Speaking during a tour of some health facilities in the Eastern Region last Wednesday, he said the decision to re-engage the retired midwives would prevent dislocation in healthcare delivery in the communities.

Last year, the Ghana Health Service (GHS) warned that health delivery faced dire consequences if efforts were not made to retain the over 500 midwives who were due for retirement between 2015 and 2016.

The tour was to enable the minister to acquaint himself with the challenges health facilities faced and receive suggestions from health personnel on ways to improve healthcare delivery.

It was also to give him a fair knowledge of the specific needs of the health facilities, so that those needs could be incorporated into the 2016/2017 national budget.

Tour
The first port of call was the Eastern Regional Health Directorate, where Mr Segbefia and his entourage met the Regional Director of Health, Dr Charity Sarpong, who briefed the team on the state of health care in the region.

The team also paid a courtesy call on the Eastern Regional Minister, Mrs Mavis Ama Frimpong, at the Regional Coordinating Council (RCC) to know the state of health management in the region.

Some of the health facilities visited by the minister and his entourage were the Koforidua Regional Hospital, the Suhum Government Hospital, the Nankase Health Centre and the Akoti Community Health Planning System (CHPS) compound.

It was observed that there was teamwork at the places visited, while health personnel also displayed a high sense of commitment to work.

The major challenges identified at the facilities were logistical constraints and shortage of staff.

He revealed that the government's policy to transform regional hospitals into teaching hospitals had put pressure on the budgetary allocation to the health sector.

'Therefore, it is important for health facilities to put in place proactive measures to increase their internally generated funds (IGF) to be able to meet some staffing and logistic needs,' he said.

CHPS compounds
Mr Segbefia said the ministry would build more CHPS compounds across the country to improve access to health care, adding that that was the best way to reduce pressure on the district, regional and referal hospitals.

The minister, who expressed satisfaction with the state of affairs at the facilities visited, urged their management to use modern technology to improve service delivery.

He also asked the management to collaborate with the metropolitan, municipal and district assemblies (MMDAs), as well as non-governmental organisations (NGOs) in their areas, to build better healthcare systems.

He urged them to be motivated by the fact that they were contributing to save lives and remain committed to their work.

In her remarks, Mrs Frimpong expressed appreciation for the projects being undertaken in the region, including the construction of a hospital in Abetifi.

She called on the government to support the region to build more health facilities, especially in the newly created districts.

Mrs Sarpong, who joined the Health Minister on the tour of the health facilities, enumerated a number of challenges the regional health sector faced in terms of health delivery and asked for government support.

'The Eastern Region has 26 MMDAs, but there are 18 hospitals at the moment because the newly created districts do not have district hospitals. The roads are also deplorable, making it quite difficult for health personnel and patients to move with ease,' she said.