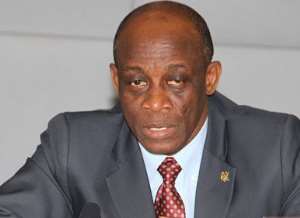 Accra, June 2, GNA - The Ministry of Finance on Thursday, denied media reports that a tax would be imposed on pensions.

A statement issued by the Public Relations Unit of the Ministry in Accra, and copied to Ghana News Agency, said the media reports attributed to the sector Minister Mr Seth Terkper, were misrepresentations.

It said the Minister at no point in his presentation say that the Income Tax Act 2015 (Act 896) imposes a tax on pensions or there was an intention to tax pensions.

It said the reference to the pension income in his delivery was to explain the philosophy of taxation adopted generally in literature and in countries that tax pensions.

According to the statement pensions are not taxable in Ghana, and quoted Article 119 (3) of the 1992 Constitution, which states that 'The pension payable to any person shall be exempt from tax'.

It explained that the Income Tax Act of 2015 (Act 896) therefore treats pension as an exempt amount under Section 7 (1) (d), which translates into the fact that any amount paid as tax shall not be taxed.

It said the Section 112 (5) of the Act 677, provides that; 'A withdrawal of all or part of a contributor's accrued benefits under a provident fund or Personal Pension Scheme', on or after retirement shall be exempt, or shall be subject to the appropriate income tax for contributors in the formal sector before 10 years of contributions and before retirement.

Again such contributions shall also be subject to the appropriate income tax for contributors in the informal sector before five years of contributions and before retirement.

The Ministry expressed the hope that the explanations given would set the records straight and put to rest the misinformation in the public domain.